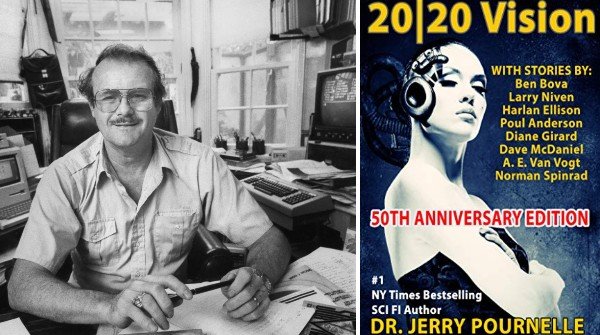 How do you predict the future with real meaning? Create a pact with the sharpest SCI FI authors of their time to depict life 50 years in the future and hold them accountable to the prediction of 2020…

In this 50th Anniversary Edition of 2020 VISION you get a chance to probe speculative forecasting from the analog 1970’s science fiction, and to take a look in the rear-view mirror from the inhabitants of that future…with the surviving authors.
The pact created by Jerry Pournelle, PHD was a “tontine’ of sorts 50 years ago. For those SCI FI authors who lived long enough to see their science fiction prediction for 2020 come to pass, readers would have a chance to probe their memories and BRIEFLY examine what they got wrong.

If you buy this book, you get a special treat at WORLDCON 2020 in New Zealand this summer. It is promised that the surviving authors of 2020 VISION will buy you a drink and you can tell them what you think of their future-casting.
After all: “When you stare into the future, you invite the future to stare back at you.”

A lot of what these authors predicted in 1970 was right, such as Larry Niven’s view of a future Los Angeles in “Cloak of Anarchy” where he predicted deadly drones and surveillance cameras to a remarkable degree. A.E. Voyt promotes the governing benefits of Population by Copulation reminiscent of challenges now faced by Planned Parenthood. Plus you get to enjoy all the comical references to “pocketphones” “pubscreens” and “pre-knowledge” these authors pounded out on an IBM typewriter.

Jerry Pournelle will not be available…but he will in spirit.
Addressing the ghost of Jerry Pournelle naturally summons up an observation: only three of the folks associated with this project are still with us: Larry Niven, Ben Bova, and Norman Spinrad. This sad rollcall of mortality is an inevitable concomitant of all such retrospective glances.

In his preface to “2020 Vision”, Jerry Pournelle explains the driving force behind this collection of short stories. He wanted a focus on realism. It was 1970; he asked the authors to envision life in 2020 as it might happen, without invading aliens, parallel universes, or other such far out contrivances. Of course, by doing so he might seem to clamp down on the greatest potential of science fiction, originality. But a sufficiently skilled author should be able to bend reality and our heads while staying with the bounds of the possible. Most of these don’t, however.

Without any doubt, the top story here is Dian Girad’s “Eat, Drink, and be Merry”. By 2020 we’ve grown so health conscious that dieting and exercise routines are enforced by law, and computers monitor the citizens nonstop for signs of unhealthiness. Against this tyranny, one woman wages a humorous battle and achieves a small victory. (Just please ignore Pournelle’s hilariously sexist introduction.) The other flagship story in this collection is Norman Spinrad’s “A Thing of Beauty”, a melancholy look at a future where Japanese industrial giants dominate the world and loot the national treasures of other cultures, even America.

Also appearing is Harlan Ellison and Poul Anderson, with Orwellian futures that make the movie BladeRunner a children’s special. Dave McDaniel’s “Prognosis: Terminal” explores Kervorkian-suicide. And Ben Bova’s “Build me a Mountain”, a tale about the politics of space exploration, is prophetic.

Read 2020 Vision in preparation for STEP FURTHER OUT.

5 Star Review: It’s interesting to see this as a historical piece, in that the stories were written in the 1970s to predict a time so close to our present time. Of the predictive parts, the drones in Larry Niven’s “Cloak of Anarchy” seems to have been pretty much on schedule. I would be willing to bet that you could mount a taser-like device on a drone now, which would work much like what is in the story. I also have to agree with the story’s analysis of what could go wrong!