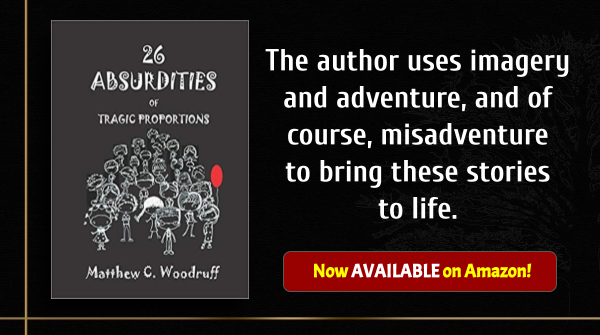 An utterly fascinating collection of short tales inspired by Edward Gorey’s alphabetical illustrations in ‘The Gashlycrumb Tinies.’
These tales capture the essence of dark humor and satire with one tale for each child depicted in Gorey’s most famous illustrations. These tales are all about human behavior, characteristics, chance and choice, and life and death. From Mystery to SciFi, from Drama to Fairy Tale and from Adventure to Gothic, this book has something for everyone.
RANKED #3 in HOT NEW RELEASES (Dark Humor) on AMAZON.

“The ABCs of the Rue Morgue?”


Hoping for an entry for the happy-ending machine? Herein, there is very little hope one can give you. This is a humorous gumbo of literary influences from Charles Dickens to Charles Addams, from Edgar Allan Poe to Steven King, and from Lemony Snickets to Jean Shepherd, but with a comedic voice unique to Mr. Woodruff as well. This gruesomely hilarious alphabet will delight Edward Gorey fans, for sure, as well as any others who frequent the darker side of comedy. Each vignette exists in its own sarcastic twilight zone, adding up to a treat for axe murderers, pirates, ninjas, and political pundits of all ages. Well, at least the ages at which you would want to terrify the young.

Matthew Woodruff is an award-winning writer, editor and publisher who now turns his hand to this unusual and entertaining short story collection. He may have the most unusual sense of humor you’ve ever encountered, but it is one you will never forget.