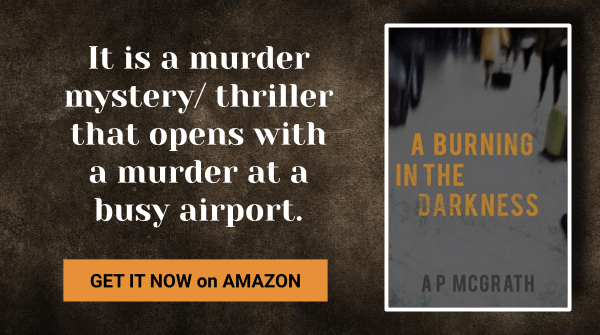 A Burning in the Darkness

by A P McGrath (Author)

What happens when you must choose between love and revenge, your past and the future?

A murder at one of the world’s busiest airports opens this simmering crime romance that shatters the life of Michael Kieh, forcing him to confront a web of corruption.

When his lonely battle seems hopeless he crosses paths with his teenage sweetheart. Despite growing up in the midst of a brutal civil war, both have devoted their lives to helping others and now they must fight to survive once again.

A Burning in the Darkness A Burning in the Darkness by AP McGrath gets high marks from this avid reader! It is a murder mystery/ thriller that opens with a murder at a busy airport. Given the state of the world today and so many acts of terrorism and the just plain nasty things that some people are doing these days, it gave me a jolt from the start. The main character in the book, Michael Kieh, is in a role that is trusted and that most people would flock to in times of crisis. Instead, all evidence points to him and he is forced to dedicate himself to proving his innocence. Another plot line of this book that I really enjoyed was a love story. Who doesn't love a good one? Given the investigation and negativity that follow Michael, I found myself rooting for him in this area. The fact that someone took a chance on him during a time of crisis in his life was endearing to me, and part of why I enjoyed this book as much as I did. All in all, this is one to read if you want to feel that you following along with the main character. This was one that I couldn't put down.

AP was born and grew up in Ireland. He now lives in London and works in TV. He is a single father with three beautiful children. He studied English and Philosophy and then post-graduate Film Studies.

A fast-paced, character driven thriller that keeps the pages turning.