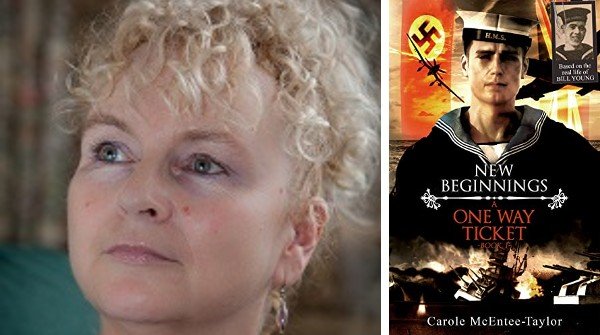 A One Way Ticket: New Beginnings

But bad luck seems to follow him and he begins to wonder if he is jinxed.

Inspired by the true story of Bill Young, A One Way Ticket is a four book series mixing fact and fiction. There are photos at the end of each book and Bill’s true story, written by his son Bob, is at the end of book 4, Journey’s End.

Bill Young is caught in a police trap while trying to rob a jewellers shop in Douglas, The Isle of Man and given a choice of approved school or the Armed Forces. After joining the Royal Navy he finds himself protecting convoys in the Atlantic before being sent to the Mediterranean. But bad luck seems to follow him and he begins to wonder if he is jinxed.

Tilly Weber had always craved excitement although murder was not part of the plan. But the world is rapidly changing and Tilly finds herself in the forefront of the fight against the Nazis. However, Tilly is torn between duty and family. Her sister Dot was evacuated at the beginning of the war and has gone missing.

Jacob Goldsmith has gone to Berlin to rescue his cousin Sura and her family. But is he too late? As Jacob is drawn into the dangerous world of intelligence, his life will never be the same again.

Bill’s sister Nora gets a job at the internment camps on the island and meets Tilly who recruits her to act as go between and give Jacob any information she finds out. They discover a Nazi plot to kidnap the Princesses Elizabeth and Margaret, but are they in time?

I write and publish military history, historical fiction and military memoirs and to date have written over 40 books, please see website for more details. I am also a ghost writer of novels, memoirs, spiritual books and various other nonfiction.

My military history books are all published by Pen & Sword.

I worked at the Military Corrective Training Centre (MCTC)in Colchester, Essex for nine years but have now moved to the beautiful countryside of North Lincolnshire with my husband David and write full time.

I have quite wide ranging interests and together with my husband David I have also written two spiritual books, The Re-Enlightenment and The Holiday from Hell.

For more information about my books or a FREE copy of book 6 in the Secret Lives series, 1918, please visit https://carolemctbooks.info or you can find me on Facebook, Twitter and Instagram.