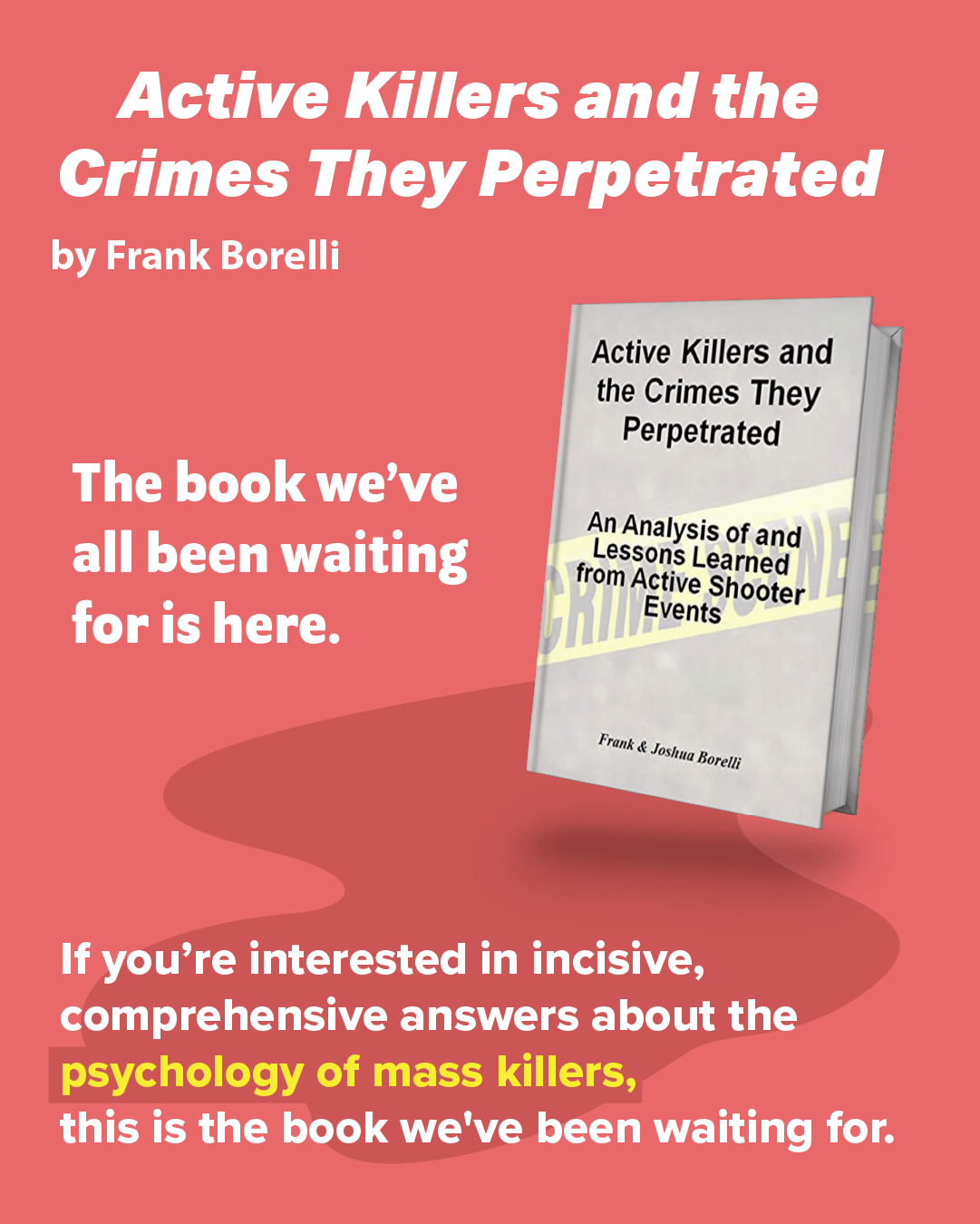 Active Killers and the Crimes They Perpetrated

This is the book we’ve been waiting for.When I say “we,” I mean anyone who has an interest, passion or professional stake in combatting mass killers. Note I didn’t say “active shooters.” That’s because Frank and Josh Borelli go beyond crimes committed with guns and take into account the historical sweep of mass attacks in the United States, regardless of the weapon used.And this, like so many other things chronicled in this book, is as it should be. Between its covers is a bracing bucket of cold water to a culture that, despite flareups of media hype, seems stuck in stupor and stalemate.“Active Killers and the Crimes They Perpetrated” stands alone in its category for three key reasons:1. It provides perspective. Today, every attack seemingly requires all of us to “start over” from ground zero, explaining laws, investigating the police response, psychoanalyzing the killer and then fruitlessly debating guns laws. The authors, through this tour de force, provide a sense of “been there, done that” so we can productively learn from events and prepare for future threats. While our culture is stuck running in circles, the Borellis point the way forward. Their thorough analysis of major public attacks since the 1700s – yes, that’s no typo! – provides a sweep that goes beyond mere academic value.2. Yet there is vital academic value. The table of contents alone will introduce you to mass attacks you’ve never heard of. The Borellis point out it wasn’t the Internet (alone, at least) or violent video games (not exclusively at least) that turned people into zombie-like killing machines. Humans, for a variety of reasons, have been murdering innocents for millennia. In understanding history – what has been done – we can prepare for the future, or what may be done. The authors also chronicle how and why police response to active shooter attacks has changed and continues to do so.3. This book, unlike many in its genre, is extremely practical. It’s no “gee whiz that’s interesting” tome. History is explained and implications drawn, ranging from the 1764 American Indian attack on a Pennsylvania schoolhouse to recent newsmakers including the Las Vegas sniper, Marjory Stoneman Douglas High School and the AME Church in Charleston, S.C. Knowledge is power. But application is the current that puts power in motion. You can’t read this book without realizing things that must be done differently. If you fail to act, that’s on you.The audience for this book goes beyond specialists. It will benefit:•Law enforcement officers wanting to improve their response to active shooters.•Law enforcement and local government leaders who want to help their teams continue to evolve to meet threats.•Journalists who want to do more than regurgitate tired and often inaccurate talking points and instead do a real service to their profession.•School teachers, administrators and school board members who want to understand the dynamics of school shootings and – most importantly – how they can be stopped.•Parents and engaged citizens who want schools and communities to proactively address security concerns instead of merely reacting.•Business owners who want to protect their employees and their customers.•Politicians who want to save lives and not merely score points (well, at least we can dream).Shining through all the insight in “Active Killers” is its heart. What do I mean by that? Although the Borellis are excellent chroniclers of history and first-rate teachers, their genuine concern to save lives is evident in every chapter. They avoid scoring cheap political points and stick to the main issue: stopping the slaughter.

About the Author: Frank Borelli

Having begun his law enforcement career as an MP, and upon receiving his first Honorable Discharge, Frank became a civilian police officer. His 30+ year career included assignments in patrol, training, youth services, investigations, task force assignments, and more. In 1995 Frank re-entered military service as a member of the Maryland Army National Guard serving both in the light infantry and combat engineers.

In addition to his police and military service, Frank began a writing career in 1999. With several hundred articles now published internationally, Frank is the Editorial Director for Endeavor Law Enforcement Media. And Frank has now launched a fourth career: built on his drive to help motivate others, he and his wife have become a fitness & nutrition coaching team.