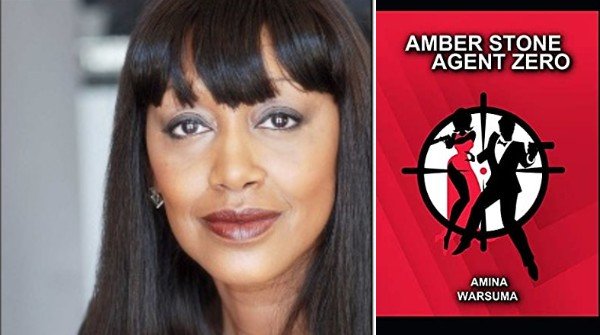 This is a New Edition. Muhammed Akbar is a courier for a terrorist cell he aspires to write their biography and become the number one bestselling author. He’s captured and tortured. To stay alive, he trades their story for his life. It leads Agent Zero on a thrilling and tense tale of espionage on a mission that’s all too personal. Little does Agent Zero know the part she will play in a world of shifting shadows.

Amber Stone Agent Zero by Amina Warsuma is a thriller with strong themes of espionage and terrorism, a novel that will appeal to readers seeking strong female characters and tightly plotted narratives with exciting locales in the setting. In this thriller, readers are introduced to Amber Stone Agent Zero, working for the DEA as an undercover agent and going through very tight and dangerous situations in Columbia. On the surface, she is a very simple woman, but underneath the calm surface is a past that is as uncomfortable as it is terrifying. Can she beat her dangerous past and find purpose in her new calling? The narrative begins with wonderful images of the setting. The author offers intriguing details about some of the key characters that readers encounter in this gripping story and situates them in a specific timeline: "In 1975 two baby girls reside in Beirut in the middle of a multifaceted civil war, and they survive the chaos for ten years." The references to the civil war and images like the ruins in the western part of the city already evoke a sense of austerity and difficult life. Then there are the terrific descriptions that strike the imagination, such as the way characters are presented for the first time: "Emani's big, hazel eyes gleam through a hijab" and "Heleema is mature and bossy with her sibling with chiseled features resembling their father." Character development is one of this author's signature skills and I enjoyed how they peel off in layers until the reader is left with their core. Amber Stone Agent Zero is intelligently plotted, deftly crafted, and rendered suspenseful in a way that it becomes irresistible.

ABOUT THE AUTHOR Amina Warsuma has been a creative writer for many years. She started writing, interviews for Andy Warhol’s Interview magazine and The Huffington Post style blog. A former international top fashion model for ten years, she’s lived all over the world and has photographed for Vogue, Harpers Bazaar, and many others. You can view photographs of her on her website http://ablackmodelinparis.com/ Amina graduated with an ASS degree from Monroe College in business in the Bronx, New York in her hometown. She graduated from Los Angeles City College for Film Cinema Production and Producing and attended UCLA for Television pilot writing. Her first book an illuminating, original, and profoundly inspiring memoir (My Stars Are Still Shining). Follow her on Twitter https:// twitter.com/aminawarsuma. She and her family now live in Los Angeles.

Little does Agent Zero know the part she will play in a world of shifting shadows.

Dear Reader, author’s recently published book “Amber Stone Agent Zero The new Edition” is now available on leading bookstores, get your copy now and help the author by writing a review of the book.
Available on ReadersFavorite.com