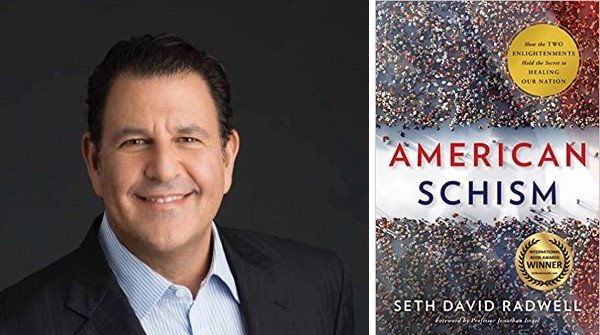 How the Two Enlightenments Hold the Secret to Healing our Nation

“Those seeking to heal our divided nation should read American Schism. In an age of unreason, Seth David Radwell deftly conveys the history of our core values and shows us a reasoned way forward.” ―Ana Navarro, CNN contributor
“American Schism is a vigorously written, deeply informed intellectual tour de force and a bracing call to nonviolent arms!” ―David J. Garrow, Pulitzer Prize-winning author of Bearing the Cross
An enlightened exploration of history to unite a deeply divided America
Two disparate Americas have always coexisted. In this thoroughly researched, engaging and ultimately hopeful story of our nation’s divergent roots, Seth David Radwell clearly links the fascinating history of the two American Enlightenments to our raging political division. He also demonstrates that reasoned analysis and historical perspective are the only antidote to irrational political discourse.
“Did my vision of America ever exist at all, or was it but a myth?” Searching for a fresh and distinctive perspective on the recent corrosion of our civic life, Radwell’s very personal and yet broadly shared question propelled his search back to our nation’s founding for a fresh and distinctive perspective on the recent corrosion of our civic life – and led to a surprising discovery. Today’s battles reflect the fundamentally divergent visions of our country that emerged at our nation’s founding and have been vying for prominence ever since. The founding principles that shaped the United States may be rooted in the Enlightenment era. But the origin of our dual Americas is a product of two distinct Enlightenments – Radical and Moderate.
American Schism begins with a quick reintroduction to the pre-Enlightenment Middle Ages and then takes readers on an in-depth journey through the revolutionary Enlightenment period including the eventual schism that began in Europe but then found its way to American shores. Radwell shows the impact of this schism on American history from the early expansion of the U.S. through Jim Crow and The Age of Trumpism.
In an optimistic and rigorous final section, Radwell lays out an analysis of our current governmental structure and a plan to move forward, demonstrating that it is only by embracing Enlightenment principles that we can build a civilized, progressive, and tolerant society – where Americans can firmly ground their different views in rationality.

About the Author: Seth David Radwell

SETH DAVID RADWELL is an internationally known business executive and thought leader in consumer marketing. A common thread across all his leadership and business endeavors has been his passion for our shared democratic values and his interest in American public policy.

Mr. Radwell served as president of e-Scholastic, the digital arm of the global children’s publishing and education conglomerate. In an earlier role he was president of Bookspan/Bertelsmann, where he was responsible for all editorial, marketing, media, and digital functions for such iconic brands as Book of the Month Club, Doubleday Book Club, and Literary Guild. Until 2018, Mr. Radwell served as the CEO of The Proactiv Company, the leading skincare brand for acne. Previously, he served as president and chief revenue officer of Guthy-Renker, the worldwide leading direct-to-consumer beauty company. Prior to his publishing career, Radwell served as senior vice president, content, for Prodigy Services Company, where he pioneered new ecommerce revenue streams for the online service business. Before that, he spent six years with management consulting firm McKinsey & Company.