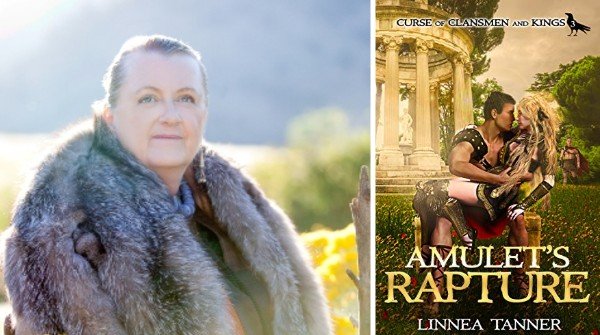 Blood stains her Celtic home and kingdom. The warrior Druid princess will do anything to retake her kingdom. Catrin is the rightful heir to the Celtic throne in Britannia, she is lucky to be alive. After witnessing the slaughter of her family at the hands of her half-brother, who was aided by the Romans, she is enslaved by a Roman commander. He disguises her as a boy in the Roman Legion with the belief that she is an oracle of Apollo and can foretell his future. The sole bright spot in her miserable new life is her forbidden lover Marcellus, the great-grandson of the famed Roman General Mark Antony.

Marcellus has been wounded and his memories of Catrin and their secret marriage were erased by a dark Druidess. Though Marcellus reunites with Catrin in Gaul and becomes her ally as she struggles to survive the brutality of her Roman master, he questions the legitimacy of their marriage and hesitates to help her escape and retake her kingdom. If their forbidden love and alliance are discovered, her dreams of returning to her Celtic home with Marcellus will be shattered.

"One of the novel's most ambitious gambits is its richly atmospheric blending of supernatural elements into the broader story. The tale features ghosts, animal familiars, shapeshifters, and all kinds of spiritual communications, and Tanner's skill at interweaving these elements is shown by how seamless the whole process feels. The book's glimpses of the world of the frontier Roman army also mostly ring true, with tensions between Marcellus and his men uniformly well drawn, particularly on the several occasions when the savagery of the soldier's own enlisted men shocks him ("The stark reality that mutilated bodies were all around him finally struck him like a brick"). This kind of fidelity to research will please readers familiar with this period of Rome's occupation of Britain (they will likely be hunting for a mention of the legendary British resistance fighter Boudicca, and they won't be disappointed). This is a strong entry in Tanner's enjoyable series."

Award-winning author, Linnea Tanner, weaves Celtic tales of love, magical adventure, and political intrigue into the backdrop of Ancient Rome and Britannia. Since childhood, she has passionately read about ancient civilizations and mythology which held women in higher esteem. Of particular interest are the enigmatic Celts who were reputed as fierce warriors and mystical Druids. Depending on the time of day and season of the year, you will find her exploring and researching ancient and medieval history, mythology and archaeology to support her writing. As the author of the CURSE OF CLANSMEN AND KINGS series, she has extensively researched and traveled to sites described within each book. A native of Colorado, Linnea attended the University of Colorado and earned both her bachelor’s and master’s degrees in chemistry. She lives in Windsor with her husband and has two children and six grandchildren.

Though Marcellus reunites with Catrin in Gaul and becomes her ally as she struggles to survive the brutality of her Roman master, he questions the legitimacy of their marriage and hesitates to help her escape and retake her kingdom.

Dear Reader, author’s recently published book “Amulet’s Rapture (Curse of Clansmen and Kings Book 3)” is now available on leading bookstores, get your copy now and help the author by writing a review of the book.
Available on Amazon