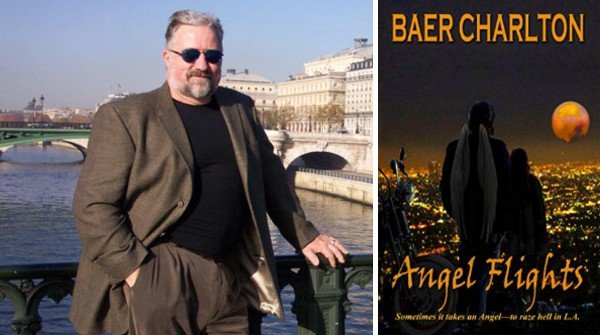 As Los Angeles comes of age in the 1960s, two undercover cops struggle to maintain their balance in the growing drug trade.  Boundaries are broken and borders are crossed in an effort to do good—while doing bad.

Newcomer Gabe learns from the masters. “Normal” is a meaningless word civilian society makes up, and the books (on being a cop) don’t know squat. The irreverent, unconventional approach gets results.

And then he must learn to deal with the frat house and the very large snake.

A phone call in the night brings it all into focus—for a battle to save a life.

The author writes a classic about intentionally corrupting policemen in order to catch people more evil and destructive to our nation than the police emulating them in order to catch them. All of this serves as an effective backdrop to a heartbreaking tale of men who risk their freedom taking young girls to a safe but illegal abortion clinic. These men are the angels spoken of in the story but honestly it is the young ladies who were usually the victims of rape, incest, pimps, and others who like to look righteous while perpetuating gross violence upon the innocent. It was these young ladies and the innocent infants they carried that were the angels to me. Some were wounded from having been abandoned to the streets, some by their politically powerful, wealthy fathers. Evil knows no boundaries: not race, not religion, not political party, nor wealth, nor poverty, nor highly educated, nor the illiterate. Evil knows no boundaries but it is an equal opportunity destroyer of all. I would have liked it better if the girls were taken to safe havens where they could heal of their psychological and physical injuries, receive free educations until they finish schooling through college, and hopefully give birth to their babies to be adopted by genuinely, loving, godly people. I would have like it better if the evil fathers, uncles, brothers, pimps, and drug pushers were arrested, sentenced to death, and shot immediately. I do not believe in the death penalty but even I will kill a dog gone mad and attacking people, sometimes mauling then to death so surely if anyone deserves the death penalty, it is those who out of their own evil hearts bring forth violence upon those most innocent and incapable of defending themselves in our land. But instead the babies receive the death penalties, even though the sin was not theirs, even though the sin was not their mothers, just because society would rather be rid of them instead of saving them. They all go to be with Jesus but their mothers are left her to suffer on. I believe the books angels to the heroes doing the very best for the girls that they know how to do. I believe the young mothers to be innocent victims of the monsters who impregnated them, I believe the nurses and doctors performing the abortions are doing the best they know how to do when faced with seemingly impossible situations. I hurt for them all as portrayed in this book and as they operate in the shadows of a real world.

2015 Pulitzer Prize Nominee, (for his book “Stoneheart”), Baer Charlton holds a degree in Social-Anthropology from the University of California at Irvine. His many interests have led him around the world in search of the different and unique. As an internationally recognized photo journalist he tracked mountain gorillas, was a podium for a Barbary Ape, communicated in sign language with an Orangutan named Boolon, kissed a kangaroo and many other wild experiences in between–or he was just monkeying around. His copyrighted logo is “WR1T3R”. The idea is that within every person, there is a story. But inside that story, is even a more memorable story. Those are the stories he likes to tell. There is no more complex and wonderful story then ones that come from the human experience. Whether it is dragons and bears that are people; a Marine finding his way home as a civilian, or a tow truck driving detective and his family. Mr. Charlton’s stories are all driven by the characters you come to think of as friends.

And then he must learn to deal with the frat house and the very large snake.

Dear Reader, author’s recently published book “Angel Flights” is now available on leading bookstores, get your copy now and help the author by writing a review of the book.
Available on Amazon