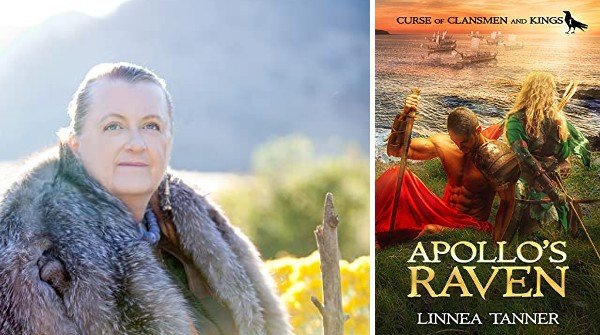 (Curse of Clansmen and Kings Book 1)

A Celtic warrior princess is torn between her forbidden love for the enemy and duty to her people.

AWARD-WINNING APOLLO’S RAVEN sweeps you into an epic Celtic tale of forbidden love, mythological adventure, and political intrigue in Ancient Rome and Britannia. In 24 AD British kings hand-picked by Rome to rule are fighting each other for power. King Amren’s former queen, a powerful Druid, has cast a curse that Blood Wolf and the Raven will rise and destroy him. The king’s daughter, Catrin, learns to her dismay that she is the Raven and her banished half-brother is Blood Wolf. Trained as a warrior, Catrin must find a way to break the curse, but she is torn between her forbidden love for her father’s enemy, Marcellus, and loyalty to her people. She must summon the magic of the Ancient Druids to alter the dark prophecy that threatens the fates of everyone in her kingdom.

Will Catrin overcome and eradicate the ancient curse. Will she be able to embrace her forbidden love for Marcellus? Will she cease the war between Blood Wolf and King Amren and save her kingdom?

About the Author: Linnea Tanner

Award-winning author, Linnea Tanner, weaves Celtic tales of love, magical adventure, and political intrigue into the backdrop of Ancient Rome and Britannia. Since childhood, she has passionately read about ancient civilizations and mythology which held women in higher esteem. Of particular interest are the enigmatic Celts who were reputed as fierce warriors and mystical Druids.

Depending on the time of day and season of the year, you will find her exploring and researching ancient and medieval history, mythology and archaeology to support her writing. As the author of the CURSE OF CLANSMEN AND KINGS series, she has extensively researched and traveled to sites described within each book.

A native of Colorado, Linnea attended the University of Colorado and earned both her bachelor’s and master’s degrees in chemistry. She lives in Windsor with her husband and has two children and six grandchildren.