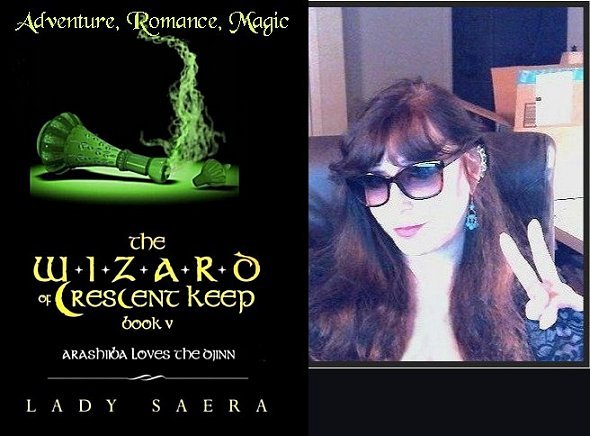 THE WIZARD OF CRESCENT KEEP Book Five Arashiiba Loves the Djinn. MAGIC-WIZARDRY-DJINN-TIME TRAVEL-PLANETARY TRAVEL- A Fairy-tale for everyone.YA-Adult Djinn Khallizar has captivated her heart, his love opens up her world and sets her free to a universe of choices, now that she has become his beloved wife and a Djinni with powers of her own. But when enemies strike, will charming Khallizar the High Djinn lose his love the beautiful Arashiiba, to a Demon after he sends her back in Time to save her life? Then desperately searching for her in another time, will she even she recognize her beloved Djinn if he finds her, or will her memories shut him out forever? Find out as Khallizar fights to regain the woman he has loved for centuries even before they met. More intrigue as the Wizard joins in to help solve the riddle. Betrayal, sorcery, erotic seduction, romance and adventure as things spin out of control again on the Djinn planet Metharg, beyond the aether of the Qaf, and the World of Two Crescent Moons.
Available on Amazon

Author of the Epic Dark Fantasy series ‘The Wizard of Crescent Keep’- That takes place on the planet ‘World of Two Crescent Moons.’ Enjoy the adventures within these tales of THE WIZARD OF CRESCENT KEEP Special Edition Series BOOKS ONE THROUGH * ‘Treasure of the Djinn’. I love Gothic adventure, witchy and wizardly tales, plus mystery and scifi as in ‘The Goblin Cage, available on Amazon, Book 2 THE Goblin Dancer due out this year in the fall, and the upcoming ‘Drumspell’ mystery, due winter 2017 or first part of 2018, and The Count’s Remorse is finished, finally and in the editing and tweaking stage, hopefully out March 2018.
Available on Amazon now, is the ‘Enhanced, polished Special Edition’ of The Wizard of Crescent Keep with my own Artworks, a Map of the planet of Two Crescent Moons, and a story that slowly leads you right into an exciting world. This book is rated YA to Adult. Im very excited about my first fantasy book THE WIZARD OF CRESCENT KEEP Special Edition Book One which is is available on Amazon now, revised, enhanced, magical adventures of a Wizard named Crescent Mc Thermoth, who falls through a Moons Light Portal as a young boy after a mysterious chest he purchases at a thrift and antiques store on an outing with his wonderful grandfather.

I loved stories about witches, wizards, sorcerers, monsters, dragons as a little girl etc. and so my stories always revolved around such characters. I never thought to publish, it was always ‘just for fun’ until finally my mom encouraged me to turn my stories into published books. My first one is out, and more to come.
The Wizard has been a character in my mind for a long time inspired by someone I love.