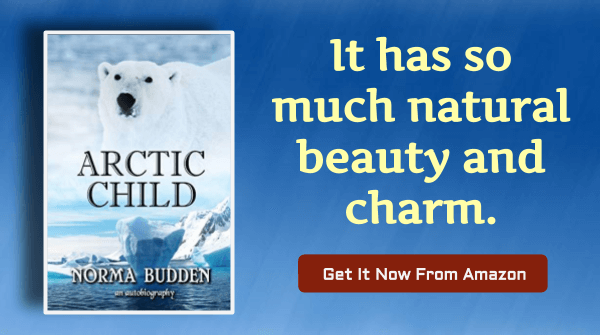 Born in a place she never lived, it set the course for Norma Budden’s life. Spending her first few months on the eastern shores of the Hudson Bay, she went on to spend her childhood living in southern Quebec, then Newfoundland and Labrador. Never forming roots in one place for more than five years, she was no stranger to making friends, only to leave each one behind.

Saying goodbye so many times has had a lasting impact upon Budden. She shares her feelings on the subject but also introduces her readers to several people who have shaped her life in positive ways.

Having spent over 26 years on the western shores of the Hudson Bay, Budden resides in Arviat, Nunavut – a remote community located above the treeline – a place she refers to as home.

Arctic Child shares thoughts and experiences from Budden’s life – from her perceptions as a child, parent, writer, and traveller and, if you know Budden personally, you’ll feel like she is telling you a story. Though she shares her innermost thoughts about a storm she wasn’t sure she would survive, Budden also paints a picture of how wondrous it is living north of 60 during the warmer months of the year.

“The Arctic is not only a land filled with ice and snow for much of the year; it has so much natural beauty and charm. Everyone should spend even a year living in the Arctic to get a true appreciation for what it’s like to live in this part of the world. Personally, you can take me out of the Arctic, but you’ll never take the Arctic out of me.” ~ Norma Budden
Available on Amazon Goodreads