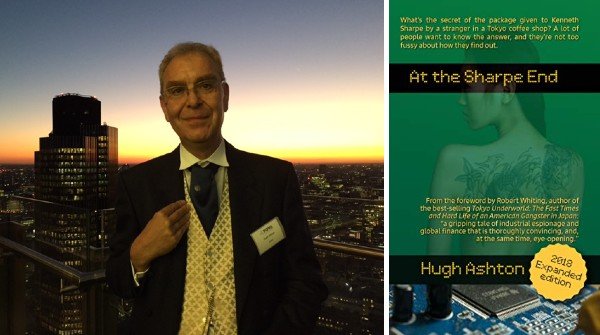 Kenneth Sharpe is a British expatriate consultant living in Tokyo. A mysterious stranger, who claims to be hunted by the American security services, presses a box into his hand shortly before being discovered dead under the wheels of a train at Tokyo’s busy Shinjuku station.

Sharpe and his Indian friends discover there’s more in the Hello Kitty box than he was originally told, and before long, Sharpe’s life (not to mention his flat) is turned upside-down as he finds himself rubbing shoulders with some very strange people indeed.

His whirlwind adventure spans East Asia, and involves the security forces of at least four countries, including North Korea, mobsters, and beautiful (if dangerous) women.

Along the way, Ashton provides readers with a view of everyday Japan and Tokyo which is far removed from the cliché of “cherry blossom and kimono” and the mystic Orient. Kenneth Sharpe’s city is a gritty, fast-moving metropolis with its quirks and idiosyncrasies.

This edition contains a foreword by Tokyo resident Robert Whiting, best-selling author of Tokyo Underworld: the Fast Life and Hard Times of an American Gangster in Tokyo, and You Gotta Have Wa, etc.