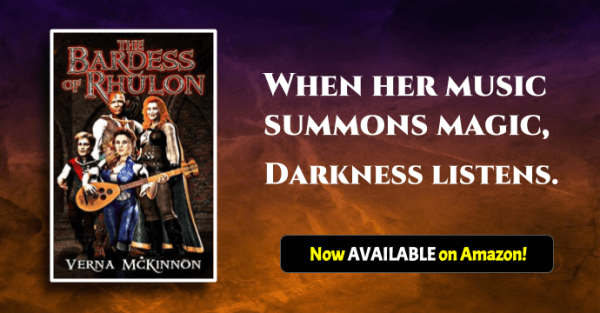 Rose Greenleaf dreams of becoming a bard and seeing the world. Her mother sees Rose as a hopeless spinster at seventeen, with abysmal cooking and sewing skills. Rose unknowingly possesses a rare bard magic called the glam rhapsodé, the power to summon magic through music. Fleeing an arranged marriage, Rose makes her way to Tirangel and scrapes a living in a tavern until the Rhulonese Ambassador, Prince Culain Ironheart, hears her sing and employs her as his official Bardess. Rose’s unexpected fortune has sinister edges. The court is shadowed by a changeling named Crimson who spies and kills. A mysterious Siabur named Fallon Gansis watches the world from his chamber of enchanted mirrors and senses Rose’s glam rhapsodé. He is one of the dark fey from legend, but he is real and watches from the shadows. Rose’s life is endangered, not only by Crimson, who obeys Fallon’s command to abduct her, but by her own latent rhapsodé magic. Rose escapes capture, but the stain of the changeling’s blood on her skin links Rose’s mind to Crimson’s, revealing dark schemes, a captive princess near death, and murder, including a plot to assassinate her new benefactor, Prince Culain. Rose risks death to save Culain from assassination and rescue the imprisoned princess by summoning her untrained glam rhapsodé.
Available on Amazon

Avid lover of fantasy, science fiction and all things joyous and geeky, Verna McKinnon is the author of the fantasy series, A Familiar’s Tale. Gate of Souls, A Familiar’s Tale, Book 1 & Tree of Bones, A Familiar’s Tale, Book 2, published through Sky Warrior Books. The final book of the trilogy, Fires of Rapiveshta, is completed and the release date is TBA. With more than 30 published short stories and many planned novels, she writes obsessively and drinks lots of coffee. More fantasy tales brimming with heroines and magic will be coming soon. Visit www.vernamckinnon.com for more info on Verna and the heroines who form her magical world.