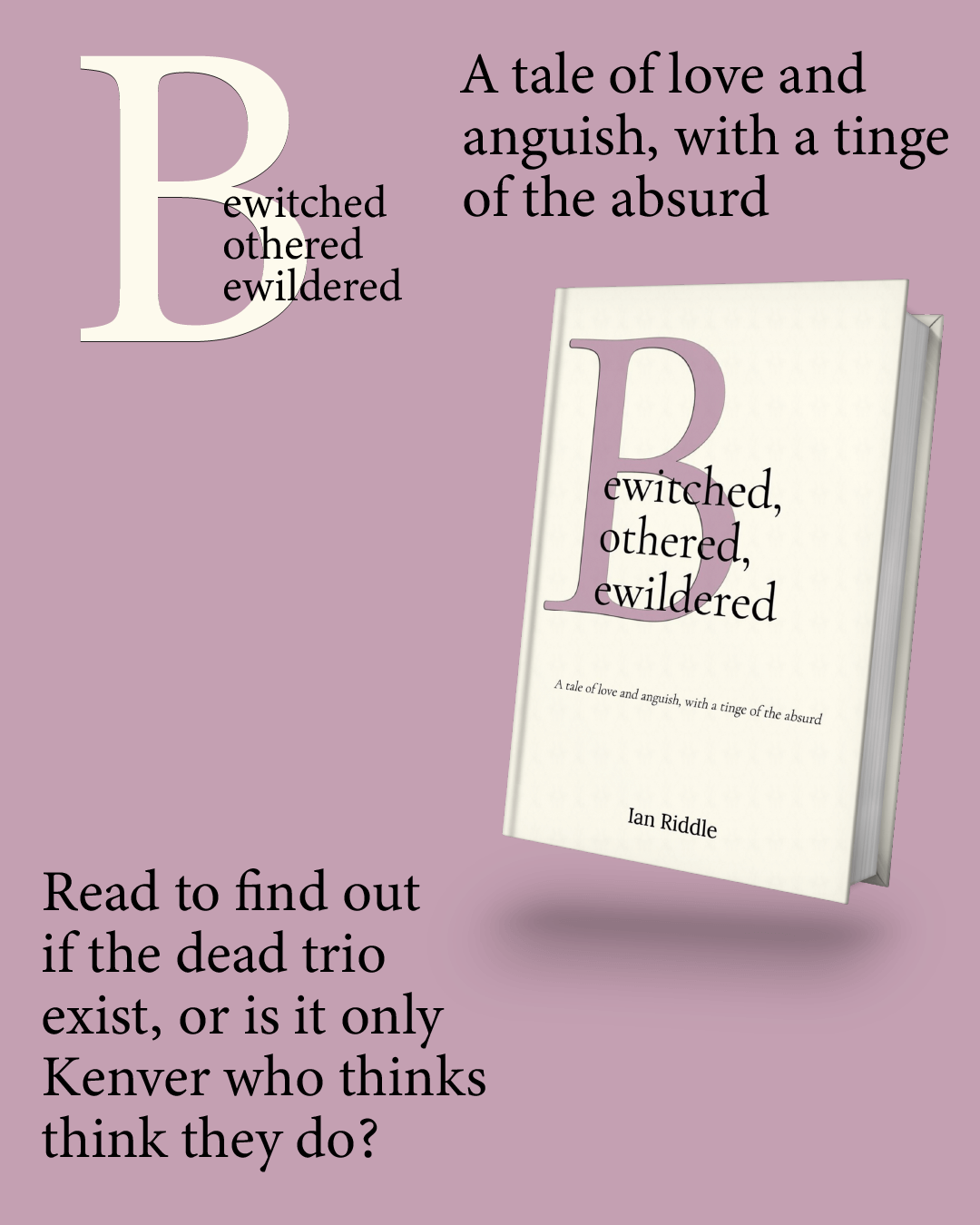 A tale of love and anguish, with a tinge of the absurd

It’s fair to say that Eloise Auclair, the lovely, adorable, Eloise, his words, has Bewitched Kenver MacDonald to the point in their relationship where Kenver feels the need to explain to her the existence of three particular friends in his life. It’s pivotal if their relationship is to continue. He can only hope that she’ll understand which is more than Kenver has done. Hence the reason he’s Bothered. Kenver’s also totally Bewildered by all that’s transpired over the last six months for, after all, he had managed to reach the age of almost thirty with nothing exciting ever having occurred and Kenver had been happy with that.

That, of course, was before his eventful trip to Singapore, his meeting with three famous, albeit dead, writers, Miller, Maugham, and Kipling, and the very much alive, Angelique Dubois who’d fed Kenver a spurious tale that he couldn’t help but fall for.

Do the dead trio exist, though, or does Kenver just think they do? His head has physically hurt as he’s tried to disentangle the rational from the irrational, the logical from the bizarre for it’s a fine line that divides the sane from the insane as he’s come to know. Most importantly, however, what will Eloise think when the tale has been told?

About the Author: Ian Riddle

I was born a long time ago now and like both Mary Wesley and Sir Christopher Bland have taken to writing rather late in life.

Following graduation from the University of East Anglia (UEA), which has subsequently become something of a literary mecca since my days there, I worked, briefly, as an Economist in London but soon moved to Cornwall, where, together with my wife, I ran my own business for many years. We lived in the small Cornish fishing village of Polperro which has provided a rich source of material for my first novel, Midsummer Dreams, due to be published Spring 2019.

I began work on the novel last January and eight months later had a rough draft ready but feeling the need of a break from it I put the manuscript to one side and thought to write just a couple of short stories. Twelve months and fifteen stories later it became clear that it was time to put this volume, Collected Writings to bed and return to where I left off, one year past, especially as I can already feel a second volume of shorts tugging at my sleeve.

After over forty years in Cornwall I crossed the Tamar and moved back to England (!) a short while ago, although only as far as Devon, where I still maintain a ‘day job’. How much longer this will last though, I’m not sure. Writing can become a seductive and powerful mistress for which one can easily develop an all consuming passion.

With thanks to Michael Terence Publishing