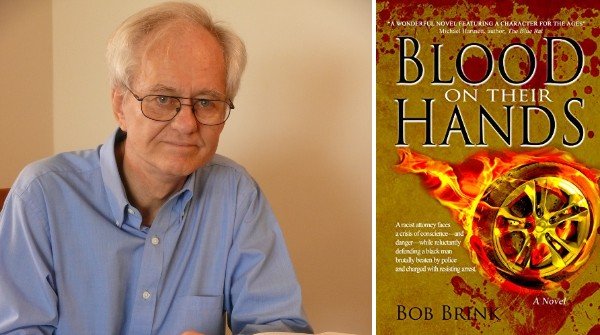 A racist attorney faces a crisis of conscience — and danger — when reluctantly defending a black man brutally beaten by police and charged with resisting arrest.
In its compelling portrayal of police brutality and racial     injustice, Blood on Their Hands is unlike other legal thrillers in its uncannily perfect timing as the country was torn asunder in spring/summer 2020 by police mistreatment of blacks. Further, it is one of a kind in its introduction of a controversial legal conundrum.

But that enigma — whether an attorney who witnesses a police beating may defend the victim — takes a back seat to the novel’s depiction of racial animosity.

Police brutality toward blacks is the salient, and altogether timely, problem addressed in Blood on Their Hands by both the legal system and the book’s characters in the racial attitudes they harbor. The novel explores these bigoted feelings in depth.

Hiram Garbuncle is a veteran criminal defense attorney — as well as a racist, miserly alcoholic. His life revolves around hoarding money, following sports, pursuing sex, drinking  — and the prideful practice of law.

Alec Monceau is a black man working to support his daughter’s family in Trinidad. It is 2008, and his car carries an Obama bumper sticker. This political advertisement leads to a superfluous traffic stop and a brutal beating by police.

It goes against Garbuncle’s grain to defend a black man from a charge of violently resisting arrest, but he is so confident of winning that he is negligent in the jury selection, and a mistrial occurs. He then discovers incriminating evidence on the two cops, and his new challenge becomes how to keep himself and his client alive pending a new trial.

Blood on Their Hands borrows themes from the movies Gran Torino and My Cousin Vinnie. It is a tale replete with both pathos and humor. Steeped in suspense, action, intrigue,violent episodes and yes, a bit of titillating sex, the story is leavened by a tragic love affair. Humorous scenes are abundant, providing comic relief. Perhaps above all, Blood is a story of redemption.