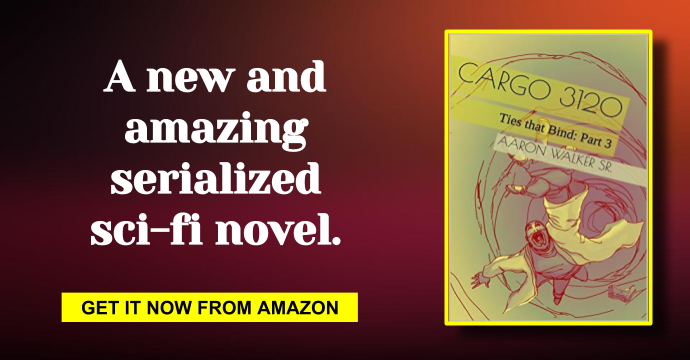 After a tumultuous stay at the Martian penal colony called Runner’s End, Marcus’ problems are just getting started as he is forced to make a choice that could have galaxy wide consequences in…

Following an extended stay at the most treacherous labor detail on all of Mars, Marcus is a broken man, struggling to walk a straight path for the sake of his family. After taking a questionable job from a shady figure out of his old life, Marcus finds things are even worse than he thought and ends up caught in the middle of a conflict that could plunge the galaxy in all-out war.
Available on Amazon

After serving in the United States Army, Aaron Walker Sr. attended Westwood College where he graduated with honors, receiving a Bachelor of Science degree in Game Software Development. Having aspirations of becoming a writer, Aaron learned the art of screenwriting. His first teleplay: CARGO (upon which the novella: Cargo 3120 Ties that Bind Part 1 is based), placed as a finalist in the TVWriter.net 2012 People’s Pilot competition. The following year the pilot episode of Cargo would once again, along with Episode 2 (co-written with Daymond C. Roman) place as finalists in the 2013 People’s Pilot competition. With the positive reception of the series concept, the decision was made to tell the story of Cargo in other mediums, starting with a series of novellas. Having been a fan of Science Fiction his entire life, Aaron hopes to one day make his mark on the genre.

Aside from writing, Aaron is (first and foremost) a devoted Christian and family man. He also enjoys all things science fiction: Books, Television, Video Games, and Movies. He works in Information Technology and lives in California.