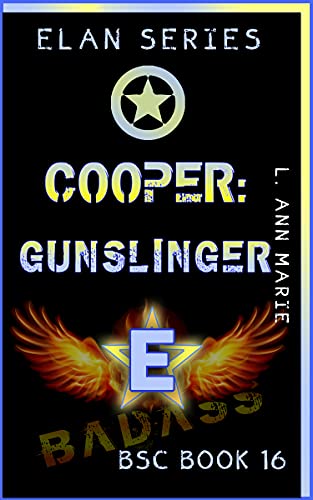 Cooper: Gunslinger This is the story of Cooper and Jane AKA “Tippy” Cooper to the rescue...a curious young girl has disappeared off the grid, but the MC has been watching her to keep her safe ...along comes mama...she is looking for her daughter and not getting very far in her high heels ... Coop and the MC were already taking care of the problem, and rescued the girl from a crazed man...the land has been poisoned...and it’s spread out ...who’s behind this?, did he act alone ? Now the mother and daughters home is no longer safe, and they “temporarily” give them shelter! First contact...Cooper meets Jane the librarian! She has lots of surprises in store for Coop, and boy does he have surprises for her ! A first date with Coop and Jane...it’s kismet, a lifetime connection is made. Cooper is feeling old...he’s going to be “thirty”, and feeling the pressure all MC Presidents have felt one time or another ...Jane has her daughter, but Coop has “just Coop”...something from Janes past nags at Cooper...he will find out what it is...the MC geek is on it! “We Doggies”, the horses are arriving and we now have Biker cowboys...this could be fun...Alder finds something that puts a smile on his face , but learns you can’t conduct most business on the back of the horse ...And Asa...lol..well His house is gonna need to be bigger ! Someone is spying on the MC, did they have ties with the crazed man?...Coop needs to get to the bottom of it, and someone has nefarious plans for Jane...it’s going to get interesting! Cooper has PTSD, some he was unaware of, but it manifests in a different manner...the horses will help him...Steve will bring him a dog...another member needs a dog...that’s a story within a story there...other old MC members are intrigued by the concept...more biker cowboys? The MC buys the depleted land, but what to do with it...nothing will ever grow on it for many many years...a place to run the motor bikes for the younger generation and alpha bits? An idea comes to light...horses are coming ...therapy horses for the men with PTSD, along with the alpha bits and those that need it....some majestic and strong, some docile and calm ... boarding is in the works also! A contract with the Govt and a thankful politician makes the MC take control of the land abutting their property long term ! Mustangs are gonna get a second chance ! Enemy number one rear’s it’s ugly head, and has all the MC in its sights! The MC’s going to be tracking down the enemies for a long time to come ! The FBI is gonna get involved, and brings Cooper under their wing...they are MC friendlies! This is book is about PTSD, all it’s implications, we have visitors from the past, action, romance, suspense, sadness, happiness, humor and mystery! Now let’s add horses and biker cowboys..lol ...”We Doggies”. .and Cooper?...he’s no longer referred to as just Cooper! Jesus Criminy, bring on the next book already ! 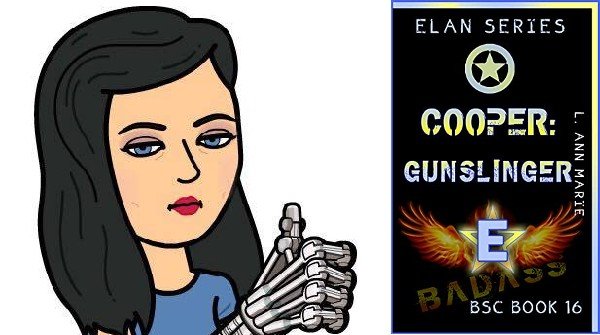 Cooper finds his ol’ lady, the impractically dressed librarian is anything but a plain-Jane. She’s full of surprises and ties that will bind them for life. Her daughter, 9, keeps life interesting in a Badass world where interesting is part of life.
Cooper is our next instalment in the BSC West saga… BSC book 16, Elan Rising Series.

L. Ann started with the Baxters and followed that with multiple series and genres. While her books feature paranormal, FBI, ex-military and Badass Bikers, L. Ann is writing about the strong women that these men need in their life to help right the world’s wrongs and keep their small part of the world safe. The women are extraordinary, strong and determined to make a difference. The men fight for right in every book. Yes, they kill people. Yes, the MC shoots at the bad guys’ feet to cause them pain. Yes, some throw tampons at each other regularly. That being said, they do these things while stopping human trafficking and experimentation, bringing their world into legitimate businesses, fighting gangs to keep drugs away from their towns and kids, keep women sheltered safely while trying to stop domestic abuse. These are men that don’t leave a pack, team member or Brother behind. They don’t treat women as possessions and they don’t cheat. Respect takes on an honorable meaning. Women and kids are cherished. Everyone is looked out for and everyone is equal. L. Ann has made amazing worlds, tackled the taboo subjects and made it easy to imagine living in a world where your protection comes from the vampires, shifters, freaky kids, albinos and orientals, military turned FBI and some Badass Bikers. With readers writing about rereading the series over and over, she feels like she’s told her characters’ stories in a way that would make them proud. Every book will make you laugh, every book will make you angry for the wrong that happens in the world. Every book will make you cry for the pain that a character feels. Every book gives you hope that we may just get it right yet.
Dear Reader, author’s recently published book “Cooper: Gunslinger BSC Book 16” is now available on leading bookstores, get your copy now and help the author by writing a review of the book.
Available on Amazon