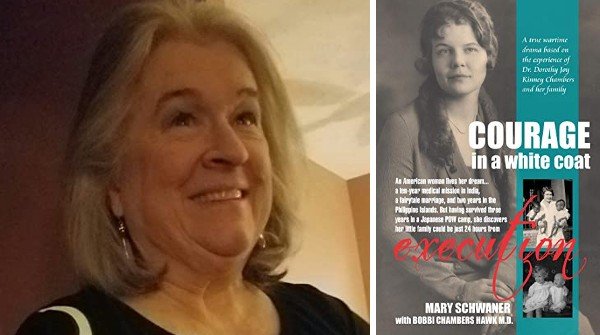 Courage in a White Coat

This true wartime drama, written in the novel format made popular by Laura Hillenbrand, reveals the experience of Dorothy Joy Kinney Chambers M.D. and her family. From her primitive missionary hospital to starvation in the prison camp, Dorothy’s story will grip your heart and inspire your admiration.

This sweeping biographical novel brings to life the dramatic experience of a valiant woman who, armed only with the white coat of her profession, found the courage to live her life on the razor’s edge and survived it. It’s a captivating story of service and sacrifice, of love and the searing emotions that gripped this missionary doctor throughout her imperiled course.

Medical school was not a welcoming place for women in 1928, but for Dorothy Joy Kinney it was the only place that could fulfill her dream. When the ‘mostly male’ profession refused her a position in obstetrics, Dorothy—having graduated second in her class—took her new degree with her to a remote outpost in India.

She could not have known that her first hospital would be an open-air pavilion with no electricity or running water, but that is what awaited her in Gauhati, India. She could not have envisioned performing surgery by the light of a Coleman lantern, but that is what she did. Within ten years she had built the crude clinic into a fully functioning hospital complete with electricity, running water, and the love of the people of Assam.

And then she fell in love.

In 1939, married and with two children, her little family was posted to the Philippines. After an idyllic year, the family of four was swept into the terrors that only war can bring. COURAGE IN A WHITE COAT recreates those fright­ening days, and life within the little family that showed resilience at every turn. Much of the story is told in their own words, incorporating the richly descriptive letters Dorothy and Fred wrote to family and friends—letters that speak unpretentiously of their love of God and family, and their mounting courage in the face of every trial.

Note: Dorothy’s family was liberated from Santo Tomas in the closing days of World War II by General Macarthur…just 24 hours before the entire camp of over four thousand men, women, and children were to have been executed.

“A lovely story of an extraordinary woman! The use of contemporary sources adds authenticity to an ordeal that could be overwhelming in its grimness were it not described so vividly and poetically.” —Dorey Schmidt, Ph.D.

While many of you know me as Mary Schwaner, coloratura soprano, graphic artist and IT geek — and yes, one of you even knows me as Grammie — Bailey Bristol is the pen name under which I write all my historical and contemporary suspense novels.

As Bailey, I promise to take you to the most amazing places…places you hadn’t thought about visiting, to be sure. Whether it’s backstage at the opera house in Vienna or at the bottom of a coal shute in Mounthaven, Ohio — the 1890’s or present day — the characters you will meet are uniquely Bailey’s.

Of course, I suppose here’s the place that I should warn you that some of Bailey’s villains are downright evil, so don’t say I caught you offguard when Baron Walraven springs one of his antique instruments of torture on you. Let’s face it. Evil is evil in all its many hues. So forgive me if occasionally Bailey paints in the darker tones.

With family and true love as over-arching themes in my stories, I hope to bring you tales that will make you weep, smile, and recommend the books to your friends. If I manage that, then I have accomplished my mission.

My wish for you: “May you have the vision and the voice to find new songs to sing.”