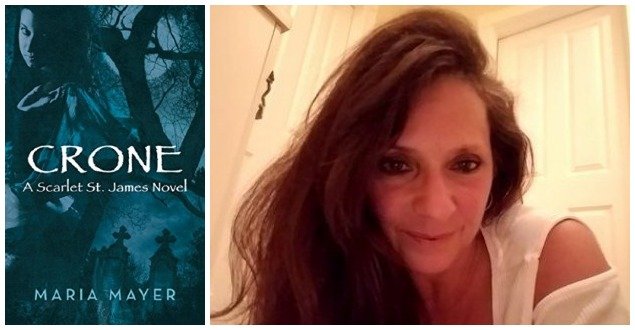 In 1984, five Michigan youths opened a portal with intentions of toying with the dark side. The cold-hearted pack then terrorized, brutalized, and even sacrificed without conscience but ended up missing. Thirty years later, two more teens have disappeared, and Paranormal PI Scarlet St. James is called to investigate.

The town needs answers, and despite the local authorities’ best efforts, no evidence is forthcoming. To find the truth, Scarlet must work with her hunky ex, Sergeant Jack Hawk, and her current boyfriend, forensic biologist Dr. Stone Vargas. As the case picks up pace, so do Scarlet’s nightmares, in which she sees the face of a killer and feels the victims’ pain.

Scarlet comes from a line of seers, so to stop the wicked supernatural force in the darkness, she must use her faith, her powers, and her team to prepare for an inevitable showdown. A monster was set free all those years ago in the Michigan woods–and it will take all Scarlet’s strength to stop a bloodthirsty witch who waits to kill again.

“All the stars! Read this book!”

I’m a sucker for scary books, and Crone is my new favorite! The 1st born women in Scarlet’s family are born with the gift of “sight” that is actually more of a curse. Using her gifts while trying to survive the side effects, Scarlet hunts an evil that has been murdering townsfolk for decades. Witty dialogue, a complex yet fast moving plot with plenty of twists and turns, and characters that turn your stomach or turn you on make this book one I couldn’t put down. I loved it!

Maria Mayer is a Michigan native who grew up in a nautical based suburb just north of Detroit. Her first book, CRONE, A Scarlet St. James Novel, is based loosely on a decades old urban legend recounting stories passed on from older generations. Inspired in part by personal experiences and purportedly true accounts of a hideous, malevolent witch said to haunt the local woods set the tone for a new category named Hip Horror. Having been interested in the paranormal from an early age, it was no surprise to those who know Maria to learn she graduated with a BS in Mortuary Science, but exciting that she combined her lifelong passion for both writing and ghost hunting with the imagination necessary to create a book series.

Numerous encounters with spirits, spiritual attachments, and entities ranging from seeing the full bodied apparition of her great grandmother to battling with a dark entity during her teenage years supported the framework in the creation of this novel.

“It was by far the most terrifying time of my life when I woke up one night to find myself immersed in complete darkness despite being early evening, with my sister and mother praying over me to rebuke the dark entity in the room. They refused to share the details of what they’d actually witnessed, as they didn’t want to scare me or give the darkness power over us. I did eventually learn that my older sister entered our shared bedroom to find the air thick and black, with the heaviest, most sinister, feeling of evil she’d ever experienced looming near my bedside. I slept with the light on for about a month afterward, until I learned how to rebuke the darkness with certain prayers on my own.”

It is always a risk to put oneself out there, as there will always be supporters as well as skeptics. However Maria found a way to retell of some of her first-hand encounters in book form, and from a third party perspective that was both horrifying as well as clever and entertaining.

Horror fans love CRONE. Read for yourself, if you dare. You just may come away a believer.