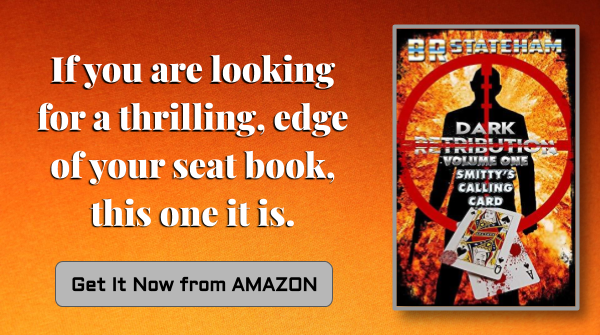 He’s desperate. He knows his sister-in-law is the next victim. And even though he’s a cop assigned to the team built to hunt the killer down and arrest him, they’ve had no luck finding him.
How does he save his sister-in-law?
Sometimes to fight evil, you must flirt with the devil. Sometimes you need a killer to find a killer.
From the talented B R Stateham, this is Volume One of Dark Retribution.
Available on Amazon Goodreads

“So maybe it would take a ghost to find a ghost.”


How far would you go to protect someone close to you? Would you call on the devil for assistance? When the police are struggling to apprehend a murderer whose signature is reminiscent of London’s Jack the Ripper, one cop does just that. He knows that sometimes, the only way to combat evil is with evil. Enter Smitty: A colder-than-ice assassin, and yet also, the ultimate contradiction. He kills without hesitation or regret, yet does all within his power to protect the innocent and vulnerable.

Prostitutes are being brutally murdered, and their killer leaves no trace and no clues. Smitty is asked to stop this fiend before he kills again. The cop has more of a stake in ending this killing spree than simply doing his job. Sources reveal his sister-in-law may be the killer’s next victim. Smitty works his way through the maze of suspects and potential victims, only to be drawn into a convoluted web of deceit and death. As the body count rises on all sides, no one could have ever imagined where Smitty’s investigation would lead.

In Dark Retribution, B.R. Stateham permits us to shadow the dark and elusive Smitty: Hope to the oppressed and living nightmare to the oppressor. B.R. has created for us a character who is neither superhuman nor supernatural, but who possesses an uncanny ability to sift through miscues and lies, and hone in on his intended target. Dark Retribution is a thriller that will lead you down a twisted and disturbing path, and you will relish every step of the journey.

B.R. Stateham is pushing almost 70, age wise. But don’t let that fool you. In his heart and soul he’s still a kid walking down mean streets and staring into dark alleys foolishly. There’s a lot of books in him left to write. He plans to do exactly that.