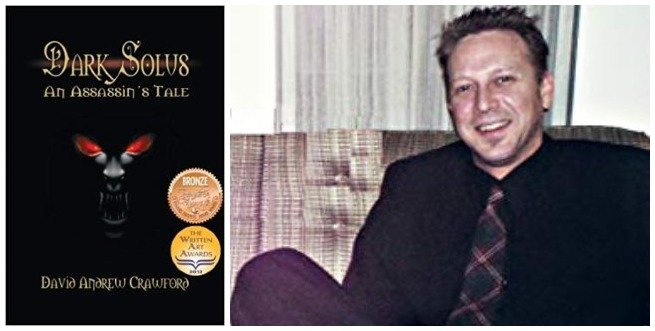 The long-awaited and much-anticipated debut novel by David Andrew Crawford is the first book of the Dark Saga series. This dark fantasy novel is set in a world ruled by magic, in a time before solid boundaries formed between the mystical kingdoms of Faerie and the mortal world of man. Submerge yourself into the thrilling, action-packed and beautifully written hardcover novel. Mythological creatures and deadly assassins armed with magical lethal devices abound in this dark tale where one lone man will exact his revenge for the merciless execution of his parents when he was just a boy. Trained in the black arts by Mephisto, an ancient silver dragon and by the shadow assassin that guards the very gates to Hell, Dark prepares for his lone mission and has set himself only one goal…to kill them all!
Available on Amazon

“A Well-Researched, Action-Packed Saga of Vengeance”

David Andrew Crawford’s Dark Solus: An Assassin’s Tale is the riveting saga of a thirteen-year-old boy and his mission to vanquish his parents’ enemies after witnessing their harrowing demise. Filled with wizards, magic, dwarves, elves, dragons, betrayal, conspiracies, and much more, Dark Solus adds a uniquely psychological element that sets it apart from the normal, run-of-the-mill fantasy. Thrillingly dark to its core, this science fiction/fantasy will not disappoint. Reaching deep into the recesses of his imagination, Crawford has crafted a well-written, detail-rich story that will make readers fall in love with this genre all over again.

As in any tantalizing fantasy tale, Dark Solus’ action-packed scenes are preceded by a winding, well-researched historical description, or back-story. The narrative revolves around Dark Solus, the son of Elim and Leynorr Solus, and his unyielding desire to eliminate the masterminds behind his parents’ murders, especially the evil wizard and Shadow Lord, Kalifen.

With the help and training from his thousand year-old grandfather Mephistopheles, a polymorphic legendary silver dragon and his friend and teacher the Styg, Warden of the Stygian Depths–a warrior and poet, and the individual who trained Dark’s father–Dark hones his powers and prepares for his mission to defeat Kalifen and Lord Blackthorn, and wreak vengeance upon the Assassins, Thieves, and Halfling Guilds.

Though the plot itself is mesmerizing, the dynamic storyline forces readers to conjure how a thirteen year-old child instantly evolves into an assassin–avenging the brutal murders of his parents. Dark is constantly haunted by the memories of his parents. More specifically, the night of the murders is described from Dark’s perspective: “That night, Dark’s sleep was restless, tormented and haunted by nightmarish images of his parents trapped inside a shadowy coffin.”

As Dark, now the cloaked assassin completes his training and prepares to invade the city of Duergar, he receives gifts and tools from his well-wishers that will help him in his endeavors. Can Dark single-handedly do what his parents were unable to do together?

Ultimately, Dark Solus: An Assassin’s Tale is captivating, from the plot to the precise details, and the fateful birth of an assassin in Dark Solus. It’s a must read for all sci-fi/fantasy aficionados.

My name is David Andrew Crawford and I was born in Fredericton, New Brunswick, Canada but moved to Ontario when I was a child. I studied psychology at Carleton University and then went in pursuit of a degree in Computer Science at Algonquin College until finally settling on web designing and development as a career choice.

Shortly thereafter, my father passed away and I delved back into one of my passions, reading fantasy novels, to help take my mind off the loss of my father. Several years passed and in a passing conversation with my mother, I was urged to write a story about the character I had made as a child playing Dungeons and Dragons. My novel is the story of Dark Solus, the character I invented for the game. On January 27, 2011, my novel, Dark Solus An Assassin’s Tale, the first novel in the Dark Saga Series, was published. My first novel won 2 awards both in the Fantasy genre and both in contests held in the United States. In February 2012 I won the 2nd place in the Written Art Awards and in August 2012 I won Bronze in the Reader’s Favorite. I also was notified on April 15, 2013, that I was the 1st finalist in the Beverly Hills Book Awards in the Fantasy genre so that is another Award for my book and to me it is validation.

I write full time and have just published my second novel in the Dark Saga series, Demon Raider The Death Stalker. I still live in Canada in the small hamlet of Hinesville with my two dogs Ares the friendly giant and Ariel, the little princess, both five-year-old Rottweilers.