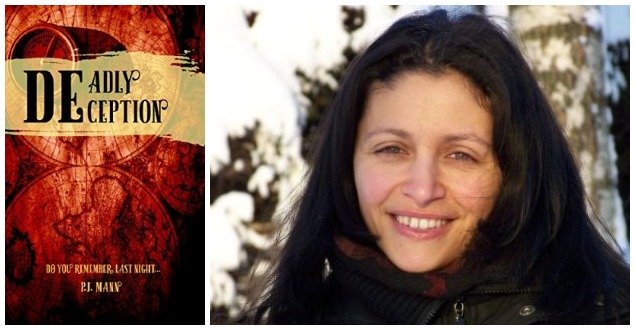 Ethan is a liar.

He can’t help it, he doesn’t even realize he’s doing it, but he lies to everyone he meets, and he doesn’t know how to stop.
Cut off from those around him, Ethan finds himself at the door of Dr. Wright, agreeing to a radical treatment. Ethan will leave his home of Boston behind to tour the world, and, given a plane ticket and a course of experimental medication, change his life forever.
But when, mid-treatment and a thousand miles from home, Ethan is accused of murder, how can he, or the embassy, or even his closest friends defend him? After all, Ethan can’t remember where he was the night the murder happened – all he knows for sure is he was with the woman just before she died.
With his freedom and sanity at stake, the truth seems to be further from Ethan’s grasp than ever. But then, if he wants to keep his freedom, perhaps lies are all he can depend on.
Available on Amazon

Paula J. Mann was born in a small town in Italy in 1973. She graduated from the Art Institute of Perugia (Italy), but continued her educational path at the Faculty of Natural Sciences, and graduated in Geosciences at the University of Perugia. Not seeing any great career chances she moved to Germany, where she enrolled in the Faculty of Geosciences in Tübingen and graduated in Applied Environmental Geosciences. Her wanderings were not yet over, and soon after the graduation, she moved to Finland where she started a career in engineering geologist. During her career, she edited and written several scientific papers, but she could not forget her artistic background, so she started to write novels. None of those was meant to be published, until one day, encouraged by one of her best friends, she decided to share her stories with the rest of the world. She doesn’t like a particular genre, and the best way to describe her production is, perhaps “fiction, drama”. She likes to tell stories about what she observes around her. She loves travelling and photography, and from those experiences, she gets the most of her inspirations.(Contacts: pj.mann2016@gmail.com)