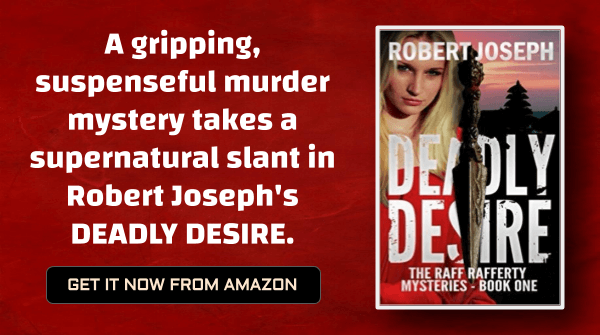 A gripping, suspenseful murder mystery takes a supernatural slant in Robert Joseph’s DEADLY DESIRE. When homicide detective Raff Rafferty is assigned to find the killer of a reclusive millionaire, he becomes embroiled in an ever-tightening web of danger and deception. Could the killer be the beautiful guru who is not only the millionaire’s heir, but also claims to be the reincarnation of a revered Tibetan lama with mystical powers? While Raff tries to catch the killer and resist the temptations of this seductive woman, he must also fight to save his own life. A tense, taut thriller, DEADLY DESIRE has enough hair-raising twists and turns to keep you guessing from the first exciting page to the last.
Available on Amazon Barnes & Noble Kobo Goodreads

I have long been a fan of Robert Joseph's colorful, compelling and original style of writing. His The Diva, brilliant saga of a world famous opera star, and Skin Deep, the captivating story of a woman plastic surgeon, are just two of the many highly readable novels that have put Bob Joseph on the map as a major talent in the field of fiction. In addition, Bob has written several Hollywood screenplays, including one filmed in India that dealt with the Kama Sutra, and he is also a prize winning playwright. Originally trained as a physician, Bob gave up his successful medical practice to dedicate himself full time to writing, and we his devoted readers are decidedly the happy beneficiaries for that fortuitous career move. Bob's newest book, Deadly Desire, as his previous works, boasts incomparable Bob Joseph touches for which the author is so well known: spellbinding story, fascinating characters, well plotted, impossible to put down. Metaphysics and murder; suspense and the supernatural; danger and deception - combine all these elements with the likes of offbeat characters you won't encounter anywhere else but from the "pen" of Bob Joseph: a determined homicide detective named "Raff" Rafferty; beautiful blond Cass Calvet, seductive spiritual leader reputed to be the reincarnation of a Tibetan Rinpoche; an unorthodox murder victim and convert to Buddhism named Willard Weems; add Rafferty's family - his daughter Fatima and ex-wife Cindi, a majestic Big Sur, California background, and you have all the ingredients of a breathtaking read. Deadly Desire is a decidedly different kind of noir, a page turner of a murder mystery thriller which will keep you guessing till the novel's final word. When you reach the end of this hair raising story, you will long for more, more, more books by Bob Joseph. The good news is, apart from Bob's previous works that you can also read, Deadly Desire is the first in a planned series of six or more books centering on detective Raff Rafferty and his criminal investigations. So stay tuned, glued to the edge of your seat! More is coming, soon!

After selling 1 million+ print books, and being published with Ballantine, Berkley, Fawcett, Pinnacle, W. H. Allen, author Robert Joseph comes to the Kindle with his latest and 10th novel, LONG AGO AND FAR AWAY, a coming-of-age story set at the end of World War II, which is currently available at Amazon.com., as are some of his other past literary works. Robert is currently working on the Raff Rafferty detective/thriller mystery series, the first of which DEADLY DESIRE is now available and will be followed very soon by others in the series. In addition, Robert has written many screenplays, including the film THE DIVINE LOVERS and works for the stage which have been produced in Los Angeles.

Intense emotion and hidden supernatural powers drive the exciting action. An excellent story, this book is well worth reading.