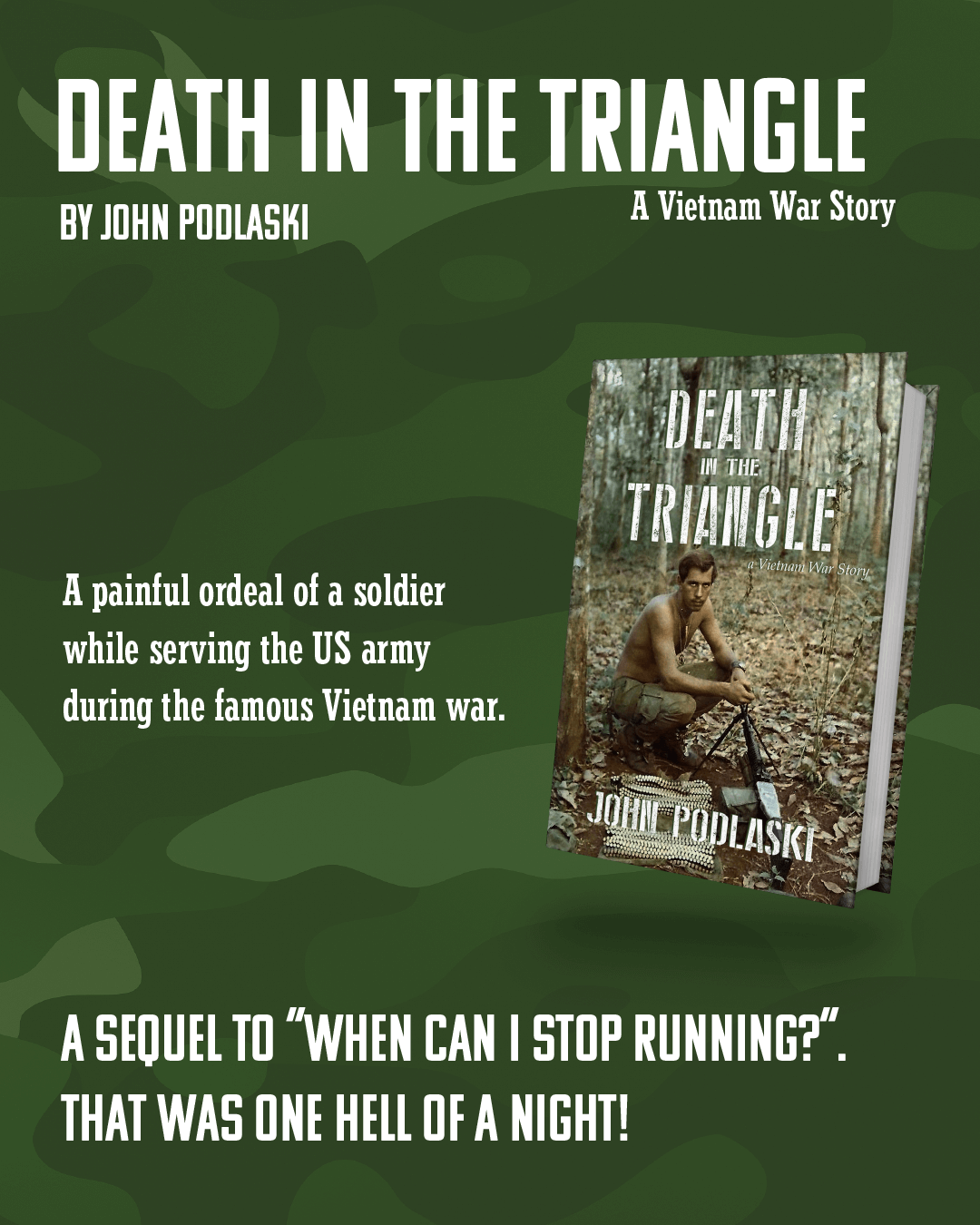 Death in the Triangle

DEATH IN THE TRIANGLE is a sequel to “When Can I Stop Running?”. That was one hell of a night!
Only a couple of hours passed since returning to the firebase. Now, the sleep-deprived and weary First Platoon soldiers must go back out on another patrol. Last night, an enemy mortar team fired several rounds into the base and was soon silenced by return artillery fire. The Third Squad also ambushed a group of enemy soldiers leaving nine dead bodies on the trail before moving out to a new location. A thorough search of both areas may locate items overlooked in the dark. It was thought to be an easy patrol – two clicks out and two clicks back, so the brass expected their return before lunch. At least, that was the plan.

Many patrols during the Vietnam War did not quite go as planned and this was one of them. These soldiers soon found themselves in dire straits to satisfy their battalion commander’s thirst for body counts and fame. Will they all survive?

Sixpack, Polack, LG, and the bunch are back in this new installment from the award-winning author of “Cherries: A Vietnam War Novel.”

What others are saying about DEATH IN THE TRIANGLE:

“Wow… what an awesome read! Once I started reading, I was a captive and couldn’t put it down as I was so anxious to see what happened next. It is a professionally written story that brought back tons of memories of my time in Vietnam. John nailed it!”
– Joe Fair, author of “Call Sign Dracula: My Tour with the Black Scarves.”

“When reading Death in the Triangle, I could see all the faces, the sweaty jungle, hear all the mind-numbing yet terrifying sounds, smell all the wretched odors, and feel the deepest fears. You said it was fiction. It’s too real to be that. Too honest to be that. A great sequel to When Can I Stop Running?”
– R Scott Ormond, author of “Shadow Soldier: Kilo Eleven.”

“Once the soldiers set out on their patrol, the action is nonstop. Podlaski puts the reader right in the thick of the danger and action in this short story! It truly gives an outsider a better understanding of what the Vietnam War was like.”
– Yvette M Calleiro, author of “The Chronicles of the Diasodz.”

“In “Death in the Triangle” John Podlaski weaves another excellent tale of a small infantry unit, fighting in the lethal caldron of Vietnam’s Iron Triangle. Follow Polack, Sixpack, Doc and other members of the 1st Platoon as they execute their difficult missions. Highly recommended!”
– Joe Campolo Jr, author of “The Kansas NCO trilogy” and “On War, Fishing & Philosophy.”

“Death in the Triangle reveals a richly detailed universe in exquisite detail, just as I remember it, with its sights, sounds, and smells. This story begins right where “When Can I Stop Running” left off. The author is a great story teller and readers will bear witness to the physical and mental hardships these young men overcame to complete the mission. Highly recommended.
– Christopher Gaynor, author of “A Soldier Boy Hears the Distant Guns”. His work also includes a feature story and photos in “Time Magazine.”

“In Death In The Triangle, John Podlaski’s third intriguing tome about the Vietnam War, John pulls you into the real experience of combat soldiers with his seat of the pants, painstakingly frank, truthful account of what real combat was like for our warriors. John, a decorated veteran of that war, tells the story of the daily trials and tribulations of a group of veterans, as only a person who has ‘done that/been there’ could.
John’s down-to-earth, regular guy portrayal of those experiences, reflected and influenced in his writing by his personal memories, takes us to Vietnam and the Triangle. You’ll cringe, weep, laugh, shudder, and feel this whole story like you were there; not wanting to set it down.”
– Jerry Kunnath, outdoor writer Member of the Michigan Outdoor Writers association

About the Author: John Podlaski

John Podlaski (1951 – ) was raised in Detroit, Michigan and attended St. Charles and St. Thomas Apostle Catholic schools, graduating in 1969. Immediately afterward, John started working for one of the automotive parts suppliers in the area and then attended junior college full-time in the fall. After four months of overwhelming pressure, John dropped out of college – choosing income over education. This turned out to be a huge error in judgement as a school deferment protected him from the military draft. Uncle Sam wasted no time and Mr. Podlaski soon found himself inducted into the Army in February 1970. Then after six months of training, John was sent to Vietnam as an infantry soldier; serving with both the Wolfhounds of the 25th Division and the Geronimo of the 101st Airborne Division. During his tour of duty, John was awarded the Combat Infantry Badge, Bronze Star, two Air Medals, the Vietnamese Cross of Gallantry, and several other campaign medals. Back in the states, Mr. Podlaski spent the next four months in Fort Hood, Texas before receiving an early military discharge in December 1971.

The War Veteran returned to his former position with the automotive supplier and because of his military experience, he was promoted to shift supervisor. He met Janice Jo a few months later and married in 1973. The G.I. Bill helped them to purchase a home in Sterling Heights, MI, they continue living there to this day. A daughter, Nicole Ann was born in 1979. Using additional benefits from the G.I. Bill, Mr. Podlaski returned to college part time; graduating four years later with an Associate Degree in Applied Science.

In 1980, John began working on his memoir about his Vietnam experiences. He had carried a diary during his year in Vietnam, and his mother had saved all the letters he had written from the war zone – both were used to create the outline. He toiled on a manual typewriter for four years before finally completing his work. About the same time, a new national veteran group, akin to the V.F.W. was formed in Washington, DC. They called themselves “Vietnam Veterans of America” and chapters quickly sprung up around the country. John joined Chapter 154 in Mt. Clemens, MI, and as an active member, helped to launch their inaugural Color Guard – marching in parades and posting colors for local events. The members of this chapter were a closely knit group, but wives often felt left out during the many discussions about Vietnam. When learning that John had authored a book about his tour of duty, the wives asked to share a copy of the manuscript, hoping it would help them better understand what their husbands might have endured during their time in Vietnam. The memoir was well received, and wives were now joining their men during these discussions. All were increasingly supportive and urged him to locate a publisher. After hundreds of rejections, a publisher from Atlanta, GA finally came forward and offered to consider the manuscript if it were re-written to a third-person format.

Atari had just come out with a new computer console and a word processor – making re-writes and editing much easier; his work now saved on floppy diskettes. The re-write continued until 1989, consuming all his spare time. John had finished half of the manuscript, then suddenly lost interest – discouraged, and not wanting to work on it any longer – it was ten years already and there was no light at the end of the tunnel. So everything was boxed up and moved to the garage for storage.

Mr. Podlaski continued working for various companies within the automotive sector; primarily in Management roles tasked in either plant start-ups, financial turnaround, or plant closures. John returned to college in 2000 and received a Bachelor Degree in Business Administration two years later. He and his wife retired in mid-2013.

At John’s 40th high school reunion, many of his former classmates who read his original manuscript twenty years earlier had questioned its lack of publication. It was a great story and all were relentless in their efforts to get him motivated and finish the rewrite – offering help wherever needed.

After learning that the conversion of Atari diskettes to the Microsoft Word format was extremely cost prohibitive, John’s daughter offered to retype both the completed manuscript and the rewrite, saving both on a USB memory stick. Nine months later, “Cherries” was completed and published. It took almost thirty years, but seeing it in print made it all worthwhile.

During his retirement, John published a second book about his Vietnam experience called, “When Can I Stop Running?” in 2016. Additionally, he’s published two short stories: Unhinged and Unwelcomed; all are available on Amazon.

The author and his wife own a 1997 Harley Davidson Heritage motorcycle and enjoy riding when possible; both are members of the Harley Owner Group.