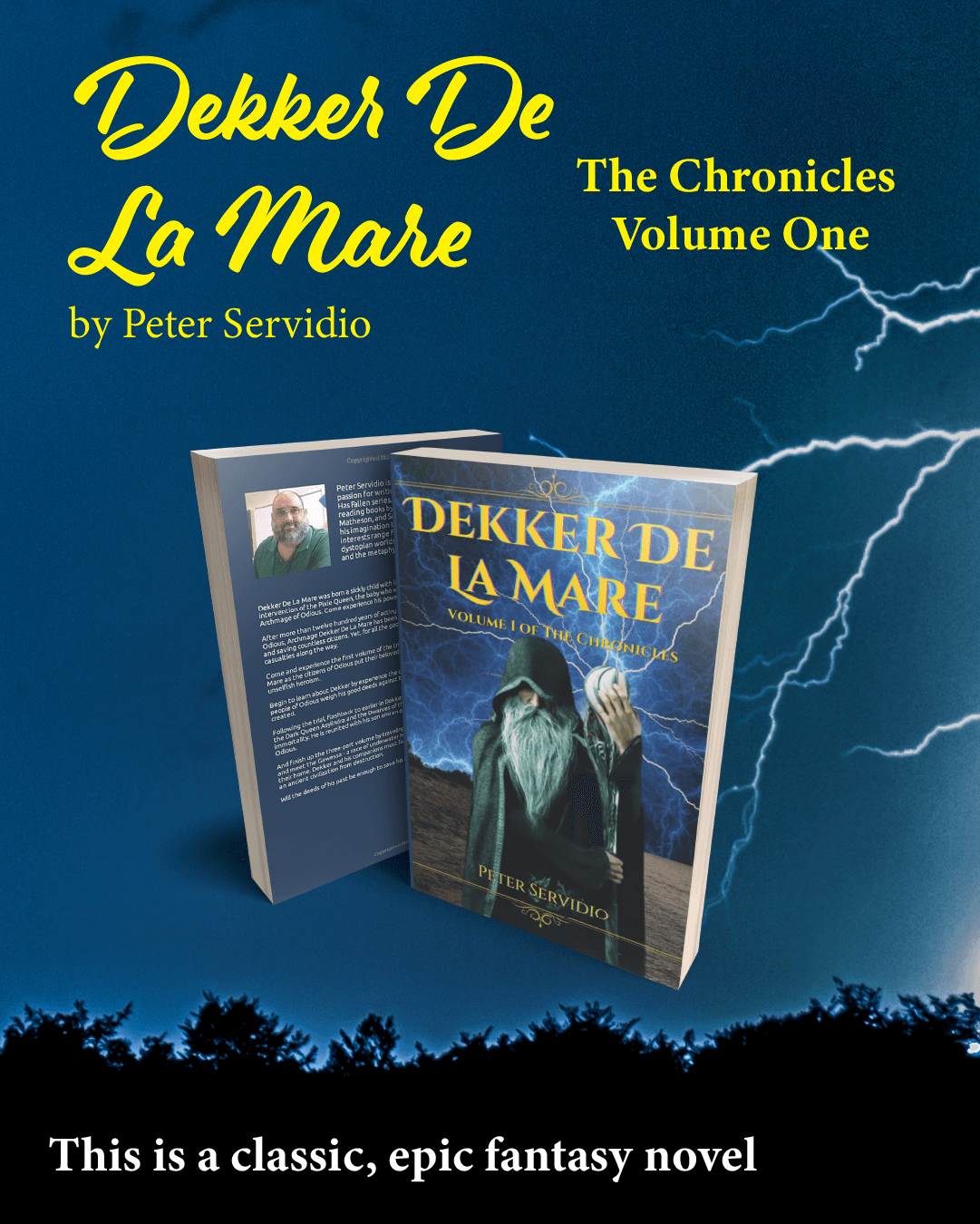 The Chronicles Volume One

Dekker De La Mare was born a sickly child with little chance to live. Thanks to the intervention of the Pixie Queen, the baby who was not to be has become the Archmage of Odious. Come experience his power!

After more than twelve hundred years of acting as the protector of the world of Odious, Archmage Dekker De La Mare has been responsible for defeating many evils and saving countless citizens. Yet, for all the good he has done there have been casualties along the way.

Come and experience the first volume of the trials and tribulations of Dekker De La Mare as the citizens of Odious put their beloved protector on trial despite his years of unselfish heroism.

Begin to learn about Dekker by experience the culmination of his life where the people of Odious weigh his good deeds against the unintentional harm he has created.

Following the trial, flashback to earlier in Dekker’s life and learn of his battles against the Dark Queen Asylindra and the Dwarves of the Magaroy as she searches for immortality. He is reunited with his son and an old friend as he works to keep order in Odious.

And finish up the three-part volume by traveling to the underwater world of Chretin, and meet the Gawessa – a race of underwater humanoids who make the deep ocean their home. Dekker and his companions must face the dreaded Cauldrstack and save an ancient civilization from destruction.

Will the deeds of his past be enough to save his future?

Buy The Chronicles of Dekker De La Mare today and start your magical journey into the world of Odious!

About the Author: Peter Servidio

Peter Servidio is a life-long learner with a passion for writing and is the author of the Earth Has Fallen series. After a childhood filled with reading books by Tolkien, Hubbard, Greenwood, Matheson, and Salvatore, Servidio has brought his imagination to life in his writings. His interests range from post-apocalyptic and dystopian worlds, to dabbling in crime novels and the metaphysical.

Having earned his doctorate from St. Thomas University, Servidio works as a College and Correspondence Coordinator for the Maine Department of Corrections as well as teachers part time at the University of Maine at Augusta. Readers have marked his writing as a “balance or realism and fantastical” that incorporates “a touch of King, a dash of Stein , and a hint of Tolkien.”

He lives in Southern Maine with his wife and three daughters. Just to make sure to keep busy, he also has two cats and a dog. When not working, writing, or spending time with his family, Servidio enjoys Dungeons & Dragons as well as MMORPGs.