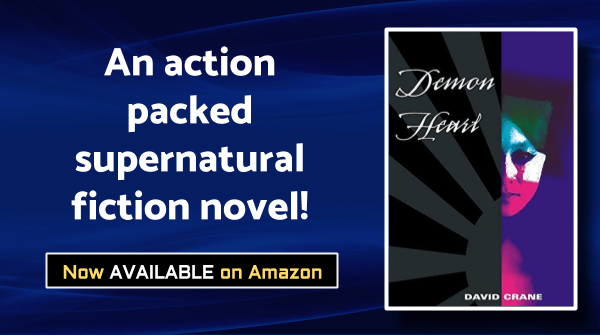 SHE IS A CREATURE OF DARKNESS AND LIGHT.

Living in modern-day Japan, Naoko Kitamura has a dark secret she must hide from her family and friends. She is a demon hybrid, a descendant from an ancient union between a samurai and a female demon. Possessing awesome powers that manifest in times of danger, Naoko tries to maintain the balance of her demonic powers and her human soul while concealing her terrifying potential. But being extraordinary, she cannot live an ordinary life.

With her demon awakening as a result of a brutal assault, Naoko seeks a personal challenge in life after experiencing love and personal tragedy. Choosing a career as a police officer, she is thrust into a secret war between powerful corporations, the underworld, and a fanatical environmentalist organization. Old and new enemies arise to alter the future of the Land of the Rising Sun.

Sworn to protect Japan against its enemies, Naoko fights her battles in a world where ancient magic will point the way to her country’s destruction or salvation. . . .
Available on Amazon Barnes & Noble Kobo Goodreads

“If you love Japan like I do, you will love this book!”

Five Star Review on Amazon By The McKenzies


If you love all things Japan as much as I do, then you will love this book. The story is told by a dying demon hybrid named Naoko. (I wondered why the author didn’t use “Hanyou” but as you read on, it makes more sense his choice of wording.) The story is written to where you could almost envision yourself floating close to her as she tells her tale. It starts when she is younger, growing up, going to school, general life for schoolage children. Except Naoko isn’t completely human. Her mother, also demon/human hybrid (as are all the females of their line). School. Martial Arts. Her first love which is cut tragically short. You can’t help but feel for her.

Life really ramps up for Naoko just before her last year of high school, which ultimately gives her a pretty good shove towards her career. She’s then thrown into a world of corporate cover ups, assassination, spooks and law enforcement, and lets not forget demons. This book never slows down, and you follow the case she is working right up to where we start the prologue… but I don’t want to give it or the ending away.

I read this book quickly because I didn’t want to put it down. The author handled the plot twists and turns expertly, and you won’t feel disappointed. I recommend this book to anyone who loves japan, thrillers, mysteries (law enforcement), and the supernatural.

I was born in the Ukraine in 1970, which was then a part of the Soviet Union, a country that no longer exists. I saw the world as a very different place while I lived behind the Iron Curtain. As a child, I never questioned anything because I was too busy trying to be a normal kid who played with toy soldiers, played soccer and hockey, who loved adventure and science fiction books, and occasionally skipped school to see my favorite movies. The world broadened for me after the famous Perestroika and Glasnost. Once forbidden movies, music, and literature from the West became more readily available.

Things changed when at the age of sixteen, I immigrated to United States with my family to join my relatives and seek a better life. I ended up a stranger in a strange land where everything fascinated me. New York City, the modern day Babylon, appealed to me with its myriad of languages, customs, and flavors. Assimilating into new culture, learning a new language, finishing high school and college, these were some of the best and most challenging years of my life. After earning my bachelor’s degree in Fine Arts and Graphic Design, I sought beauty in all its forms until slowly and rather surprisingly a new irresistible desire emerged inside me: a love of writing.

I had great teachers who taught me the craft with great patience, fun and understanding. I learned from the books written by some of the best writers in the world: Jack London, Ernst Hemingway, David Morell, Isaac Azimov, Arthur C. Clarke, Frank Herbert… And the movies that always inspired me are on my shelf, waiting to be picked up when I need to go where the winds of creation will take me. For me writing is a labor of love. I want to share with my readers all the fun and joy of creativity and imagination. My hobbies include traveling, book and coin collecting, graphic novels, Japanese food and manga, military history and science.

I currently live in New York City where I enjoy the best the Big Apple has to offer.