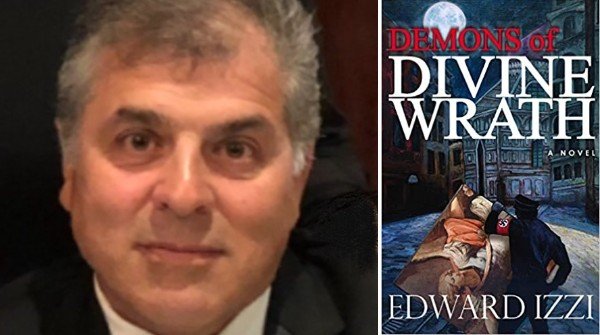 When Chicago mobster Don Carlo Marchese is found hanging from the 18th story window of the Blackstone Hotel, Reporter Paul Crawford of the Chicago Sun Times is assigned to investigate. He finds out that Don Carlo was brokering art works for the Vatican’s Pope Emeritus Hinorius V (Josef Cardinal Schroder). Because of all the innumerate sexual molestation lawsuits that have been settled by many archdioceses’ internationally, the Vatican has been in dire need of money, and began the process of liquidating Vatican Museum artworks. Last July, Hermann Kalkschmidt, the son of a former Nazi officer, is found dead in his Munich apartment. Hidden in his attic for the last seventy-five years, are forty-two paintings stolen by the Nazis from Florence’s Uffizi Gallery in 1943. His second cousin, Chicago art dealer Wolfgang Schmidt is suspected of having his cousin killed by the professional assassin Stefano Iannucci for possession of these paintings. The Pope Emeritus, “Papa Onorio” believes that these stolen paintings really belong to the Vatican Museum. He decides to try to recover the stolen art collection, believing that their recovery back to Rome would restore his abysmal public image. He turns to Chicago mobster Don Carlo Marchese to retrieve these works of art.Apparently, Pope Pius XI consigned the valuable art collection to Mussolini back in 1938, to be stored in safekeeping at the Uffizi Museum. He feared that if Hitler ever invaded Rome, the Vatican artworks would be looted. But in November 1943, the opposite occurred. Florence was invaded, and the Nazis discovered 103 Jewish refugee hiding in one of Florence’s basilicas. The paintings were traded to the Nazis for the lives of these Jews, who were supposed to be transported to Switzerland. They were sent to the Auschwitz concentration camps instead.When Marchese double crosses Papa Onorio, he hires “contract killer” Stefano Iannucci to stop at nothing, including murder, to retrieve those paintings. Meanwhile, Florence’s Giammarco crime family is in search of the Uffizi art collection as well, in conflict with the Vatican over their true ownership. Blood and dead bodies start appearing everywhere, from Chicago to Munich to Detroit to Florence, and the search for these paintings, and especially Fra Filippo Lippi’s valuable masterpiece “Demons of Divine Wrath” remain at large.