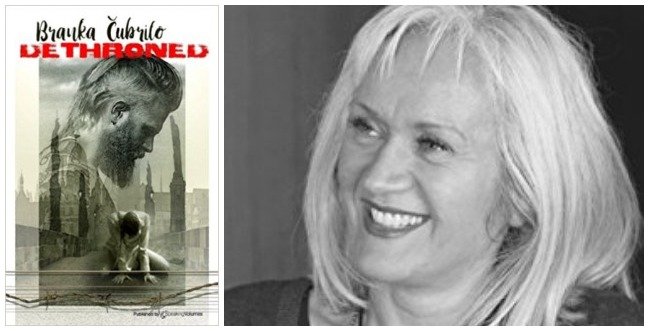 When Gregor Truba, the God of eighties Rock, exchanged his guitar in the nineties for a machine gun, he couldn’t know he was going to be dethroned not only from the centre stage which he dominated for a decade, but from his own soul as he set off on a bloody rampage with his elite troupe of Brothers in Arms. He loved a young gifted poetess Pia, the great-grandniece of Nikola Tesla, who wasn’t able to return Gregor’s love, for she was dethroned from love after witnessing the most shattering scene possibly staged by her father. Would she ever be able to find love on her mysterious journey from Amsterdam to London, Sydney to Japan? How many dark secrets did the Catholic Priest, Friar Marag, keep under his tightly-lipped smile, whilst purposely manipulating the faithful, shaping and sculpting their minds and realities as if he were a co-creator working in alliance with the Devil himself to generate chaos and leave his personal stamp on the existence and history of his country? Was he dethroned from humanity for his numerous and well-planned misdeeds? Was Veronika Truba dethroned from her original self when she changed her name to Nikki Barlow upon her arrival to London, where she formed an unusual friendship with a flamboyant man and the commitment-phobe Dean Bloxham? “And where do I go to be myself again?” The question no one could answer at that time, a time when everyone lost, everyone was dethroned and everything was meant to be broken.
Available on Amazon

Dethroned is a captivating journey into the amazing world of Branka Cubilo. Her new novel opened a world for me that I would not ordinarily enter and is an eye opener for many different reasons. The story is one that at once grips and makes you question your own reason for being.

The very striking cover, suggests a tale that could be set anywhere but it is immediately apparent that it is one that is close to the heart of the author having grown up on the shores of the Adriatic.

The reader is immediately immersed in a world of love, intrigue and brutal conflict in places that one imagines but for me cannot easily understand. What Branka has done brilliantly, is to allow the reader to enter into the minds of those willing and unwilling participants of a brooding and distructive civil war and to bring some understanding of its consequences. It is both bleak and uplifting.

It is perhaps no coincidence that a central character in Dethroned is a woman born in the same year as Branka and one whom has in some ways followed a similar path, most notably one of leaving the country of her birth.

There can be no doubt that Dethroned operates of many levels and for each reader it will reveal more about themselves than perhaps they would wish. Those who have read Branka’s previous works will recognise elements that have been woven into this story but this is a very different offering into her psyche.

At the age of eighteen Branka Cubrilo wrote her first novel I Knew Jane Eyre, which won the Yugoslavian Young Writers Award in 1982. Soon after she wrote the sequel Looking for Jane Eyre. In 1999 Branka published the book Fiume Corre – Rijeka Tece, a year later Requiem for Barbara and in 2001 Little Lies – Big Lies (as a part of a trilogy called Spanish Stories for which she obtained a scholarship from the Spanish Ministry of Foreign Affairs). In 2011 Branka published her first novel in English with Speaking Volumes, Mosaic of the Broken Soul, followed by Fiume – The Lost River (2014). In 2016 Branka published a collection of short stories The Lonely Poet and Other Stories. Dethroned is Branka’s fourth book published in English by Speaking Volumes. Currently Branka is preparing another book of short stories, Three to Tango and Other Tales. Branka lives in Sydney with her daughter Althea.