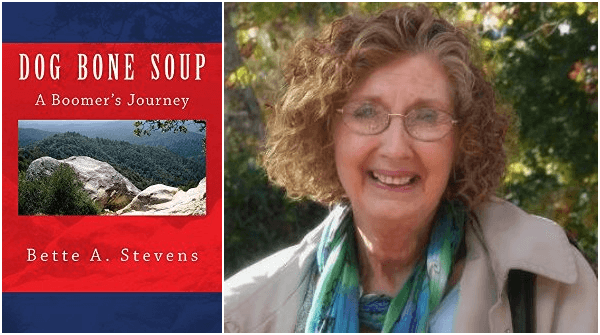 Whether or not You Grew Up in the 1950s and 60s, you’ll find DOG BONE SOUP (Historical Fiction) to be soup for the soul. In this coming-of-age novel, Shawn Daniels’s father is the town drunk. Shawn and his brother Willie are in charge of handling everything that needs to be done around the ramshackle place they call home—lugging in water for cooking and cleaning, splitting and stacking firewood…But when chores are done, these resourceful kids strike out on boundless adventures that don’t cost a dime. DOG BONE SOUP is the poignant tale of a dysfunctional family struggling to survive in America in the 50s and 60s, when others were living The American Dream.

In preparing to write this review, I read a couple of other reviews of this book on Amazon and Goodreads. I was interested to note one comment that likened this book to The Adventures of Huckleberry Finn by Mark Twain. I can see why this comparison has been drawn as Bette A. Stevens main character, Shawn Daniels, and Huckleberry Finn are both boys dogged by poverty and abusive and alcoholic fathers. Both boys are also fairly resourceful and have survival skills. For me, however, that was where the comparison ended. Stevens depicts the Daniels family as being tight knit despite their unfortunate father. The children and their Mother work together to salvage their situation to the best extent they can. I really felt sad for the Mother as she was a victim of her own hormones and emotions and could not find the strength to break away from her selfish and abusive husband. She remained in a downward spiralling situation and ended up having a fourth child which was really unwise. Shawn, the eldest child, does his best to be hard working, industrious and do well at school. He is a role model for his younger brother, Willie, and two younger sisters. Shawn tries to make the best of his situation and grasp opportunities that come his way. I found this story to be very poignant and moving and Stevens’ writing is captivating. Despite some disturbing descriptions in the book I still found it to be a very uplifting book. Highly recommended.

Inspired by nature and human nature, author Bette A. Stevens is a retired elementary and middle school teacher, a wife, mother of two and grandmother of eight. Stevens lives in central Maine with her husband on their 37-acre farmstead where she enjoys reading, writing, gardening, walking and reveling in the beauty of nature. She advocates for children and families, for childhood literacy and for the conservation of monarch butterflies (milkweed is the only plant that monarch caterpillars will eat). The author is currently (2019) working on two poetry collections. MY MAINE: Haiku through the Seasons (Poetry & Photography Collection (2019).

DOG BONE SOUP is the poignant tale of a dysfunctional family struggling to survive in America in the 50s and 60s, when others were living The American Dream.

Dear Reader, author’s recently published book “DOG BONE SOUP (Historical Fiction)” is now available on leading bookstores, get your copy now and help the author by writing a review of the book.
Available on Amazon