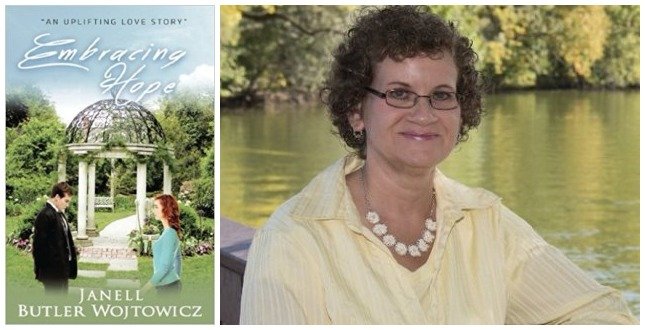 Christian college dean Drew McKinley mourns his dead wife and still wears his wedding ring. He stumbles on a desperate journey to understand God’s motives for her tragic death. Crossing his perilous path is Allison, a graduate student and new employee in the dean’s office. Even as she deals with financial hardships, she recognizes Drew’s unresolved grief from her own loss. Putting up a roadblock is Chris Whitney, the handsome but egotistical student senate president. He carries the secret burden of a dysfunctional family and a below-the-surface temper. The road Drew must navigate is fraught with career upheaval, a reawakening heart, substance and domestic abuse, a violent assault, and the struggle for forgiveness and restoration. Will Drew finish his journey to embrace the hope God offers, the love Allison shares, and the guidance Chris needs, or will he turn his back on all three with catastrophic consequences?
Available on Amazon

“An Excellent Story of Grief and Forgiveness!”

Embracing Hope (2016) by Janell Butler Wojtowicz is an incredibly emotional stand-alone novel. This novel was released last November by Discern Products. This book comes in all forms including eBook, and is 314 pages in length. With a full-time job and a very energetic five-year old, this novel took me two days to read. I give this story 5 STARS. This is a Contemporary Christian Romance.

I highly recommend this novel, but I think it is important for future readers to know that this story contains some very heavy topics including violence, alcohol abuse, and temporary mental instability caused by severe trauma and grief.

This novel is fantastic! I found this story to be completely engaging and endearing, and I truly had a difficult time putting this book down. Late into the night I said to myself, “I can do one more chapter!” My emotions ran the gamut with this book, and I did find myself hurting deeply for the main characters, Drew and Allison. Both Drew and Allison are wonderfully and authentically written. And, I really loved the setting for this book. I have been a high school teacher for the past 13 years, so I totally relate to many of Drew’s frustrations with his students. All in all, I would have to say that this is definitely one of the best stories I have read this year. Wojtowicz is an incredibly gifted writer and I look forward to what she publishes in the future!

What I liked the best about this novel is that it doesn’t shy away from the truth about trauma and grief. It doesn’t try to sugarcoat anything. At the beginning of this novel, the reader is introduced to Drew, the dean of a Christian college. He is young, handsome, and intelligent, but he is carrying a grief that is slowly killing him. He has lost all hope and is very angry at God. Instead of dealing with his trauma and grief, Drew just throws himself into his work where he feels it is safe to hide from his now-empty life and too complicated feelings. At first this works, but then he has to go to a funeral — the first funeral since his wife’s death. This funeral is the start of his true feelings seeping out a tiny little bit. Drew has hit a snag in his “I’m just going to run away from all my feelings” plan, and he does slowly descend into a slight madness.

Allison is a 25-year old college student who works for Drew. Allison has experienced some tough times in her short life, but ultimately learned that leaning on God is really the only way to overcome and move on. Allison is the breath of fresh air that Drew needs to help him see that hope isn’t lost and that God isn’t a “bad” guy. Allison is strong, independent, and beautiful. She is a woman with a carefully plotted plan…until a traumatic wrench is thrown her way and her faith is tested. Allison, like Drew, is faced with a horrific moment, and becomes very angry and scared. She, too, has a “runaway from it all” moment, and does seem a bit petulant, but through counseling, prayer, and time, Allison is able to overcome.

On September 12, 2008, there was a Metrolink train crash in Chatsworth, CA. It made the news across the nation, and I remember watching on TV as the news reporters showed the horrific images of the trains that had collided and were on fire. I remember thinking how grateful I was that I didn’t know anyone who traveled by train, and I prayed that my dad, who is a firefighter for LA County Fire, would be safe because I knew he was called out to the scene. I went to bed that night sad for those who were going to get scary, sad calls throughout the night and the next day, but was so grateful I wouldn’t be one of those people. The next morning, a Saturday, I was awakened to my cell phone going off. It was a teacher from my school telling me to get dressed and head over to Chatsworth High School. One of my fellow coworkers, Angela, was there awaiting news about her son, Jacob, who had been on the train. I work in an Academy, and we teachers are a super tight-knit group. Jacob had been a student in several of our classes at one point during his four years at Palmdale High School. Jacob was never one of my students, but I worked with him on a few Academy projects, so I was blessed to get to know him a little. What I learned, as did all of his Academy teachers, is that Jacob was a truly remarkable young man. So getting the call to hang out and support his mom was a no brainer.

We waited for hours. Cops would come in to the room we were put in with random updates. Some families were escorted to various hospitals to be reunited with loved ones who had been found in the train wreckage. Some families were escorted into the room reserved for the cops to tell in private the bad news that their loved ones had been recovered, but were no longer living. It was an awful day full of ups and downs. But, we all waited surrounding Angela with whatever she needed: hugs, prayers, jokes, food, coffee, etc. Then, almost a full 24 hours after the crash, a fire captain and cop came into the room, sat in front of Angela, and gave her the news no mother should ever be given: they had found Jacob and he had not survived the crash. I can remember the moment like it was yesterday. Angela was directly across from me, and she was just staring at me sobbing as this man gave her news that would leave her totally shattered for the rest of her life.

Trauma is awful. I hate it. I hate that we live in a world that hurts people every day. I, too, have struggled with reconciling that God, our beautiful, perfect, omniscient God, allows so much trauma to occur. That day with Angela changed me. It took a long time for me to overcome the grief I felt over Jacob’s horrific passing. Most days, I acted like Drew and denied everything and focused solely on my work just to make it through a day. When we found out the train accident occurred because the Metrolink conductor was too busy being on his cell phone and blew past two yellow warning lights and one red light telling him to stop, an anger I had never experienced before erupted in my chest. The anger was unlike anything I had ever experienced in my life. When I saw Angela at school after she returned from her leave of absence, I was immediately angry at the man who had destroyed her life. There was nothing I could do. There was no place to put my anger. It started to brutally affect my life: I wasn’t sleeping anymore because of nightmares, I wasn’t eating anymore, and I was so short fused I yelled at everyone and everything. I truly felt a little like I was going crazy. The only thing that allowed me to overcome this anger was time, being surrounded by my loved ones and fellow teachers, and Bible study. If it wasn’t for God, I don’t know what I would have done.

Embracing Hope is an excellent novel. I really feel that Ms. Wojtowicz did a respectful and honorable job depicting a true-to-life, emotional story about loss, grief, anger, and forgiveness. I could relate every step of the way to Drew and Allison’s struggles. This novel was very cathartic for me, and I enjoyed every second with this book. I highly recommend this novel, and truly cannot wait for Ms. Wojtowicz’s next novel.

Janell Butler Wojtowicz, born and raised on an Iowa farm, was one of those kids who loved to write the dreaded “What I did on summer vacation” essay. She wrote stories for her own enjoyment, including a short story about a teenage drug addict—something of which she knew nothing about. Her cousin illustrated the cover using Halloween orange paper featuring a hypodermic needle.

Janell attended the University of Northwestern in St. Paul, Minnesota, earning a bachelor’s degree in, naturally, Written Communication, adding a Journalism Emphasis. She returned to Iowa where she worked as a reporter/editor at three small town newspapers for 10 years.

Janell left the small town Iowa life when she married, Frank Wojtowicz, a family friend who lived in Minneapolis. (By the way, her Polish last name is pronounced “Why-tow-vitch.) She worked in public relations at her alma mater, the University of Northwestern; Leadership Foundations, a nonprofit organization supporting inner-city Christian ministries; and the Minneapolis Park and Recreation Board. Today, Janell owns a freelance service, A Portrait in Words, and is a member of American Christian Fiction Writers and Romance Writers of America.

Much of Janell’s writing has been the “people stories” of trial, tragedy and triumph, which are reflected in her debut novel, “Embracing Hope.” The idea for the novel came after watching a BBC version of “Jane Eyre” in 2007. That night she dreamed the beginning, pivotal scene in the middle and the ending of “Embracing Hope”, and began writing it the next day. Unlike her first story, she was very familiar with the setting of “Embracing Hope”: a Christian college campus.

She and Frank, live in New Brighton, Minnesota, a pleasant suburb of the Twin Cities. She has two step-sons, a step-daughter-in-law, and three step-granddaughters.