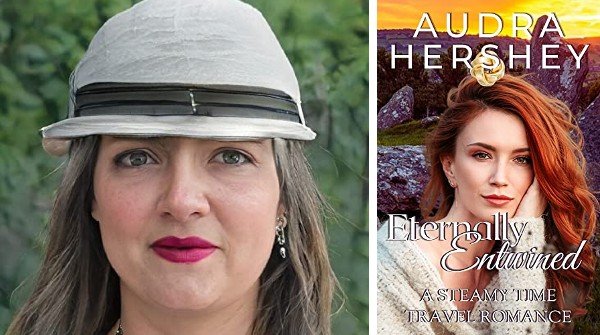 The ruins of an ancient Celtic village. A brooding Medieval keep with a malevolent history. What happened here to give this beautiful countryside such an evil reputation?

Rural Ireland, Modern Day. Elena Rutherford is an Ancient Celtic culture phenom. Instead of looking forward to a summer in the Irish countryside with her research partner and fiancé, she’s dreading it – their relationship is over. And whether he is real or not, a druid has invaded her dreams – and her bed!

Hibernia, Time Unknown. Balinor is a druidic healer in Ancient Ireland whose homeland has been invaded by a legion of Romans. And if the Roman commander dies of the plague they brought, his sadistic second in command will slaughter his people!

A fall through time in the Irish countryside leads Elena back in time to her dream lover. But how can she help her true love save his people from the Roman Plague?

About the Author: Audra Hershey

Audra Hershey wrote her first book at 10 and hasn’t stopped writing since. She holds a master’s degree from the University of Denver and lives in Colorado.

When she’s not writing steamy stories where lovers are parted by the depths of time, she revamps her elderly house, walks her dogs, watches the native birds and wildlife, and bikes with her husband and son.

Beyond writing the kinds of romance stories that make a grown man blush, her passions include cooking, Chinese food, and making homemade cosmetics – not necessarily in that order. She left law school to trace her family history – to colonial Massachusetts and Quaker Pennsylvania and then to Europe to find Norman knights, Vikings, and Pictish warriors scaring the Romans into building Hadrian’s wall.

She is fascinated by history – you’ll find her passion for historical research throughout her books.