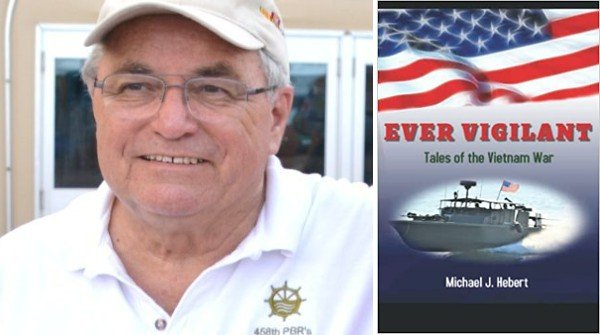 War is carried out by young people trained for the task. It occurs at the edge, or just over the edge, of what passes for civilized behavior. During the Vietnam War, the US military employed heavily-armed high-speed gunboats to intercept and disrupt enemy travel on the rivers and bays of South Vietnam.

In this variant from standard Vietnam War works, Michael Hebert takes the reader along for a ride in this engaging memoir of his year in Vietnam. This light yet quick-witted nautical adventure entertains readers with tales of romance, daring exploits, and abject fear. It is full of mayhem peppered with humorous undertones.

The remote Vung Ro Bay, while an idyllic setting, is not without peril. It is a constant target for snipers, mortar barrages, and full-out perimeter assaults. Hebert’s boat becomes a casualty to a rocket propelled grenade. Their base is wiped out by a super typhoon and they are forced to spend two days in the South China Sea with mountainous swells that threaten to sink the small 32-foot craft.

From start to finish, ‘Ever Vigilant’ is an introduction to a young man’s journey and coming of age in a war zone. While primarily based on his first-hand experience, he deftly weaves sufficient representation to incorporate the difficult life circumstances of the Vietnamese people and the Viet Cong. The motivation for why the enemy fights is a product of the life-hardships they bear. ‘Ever Vigilant’ offers a lively, compulsive read.