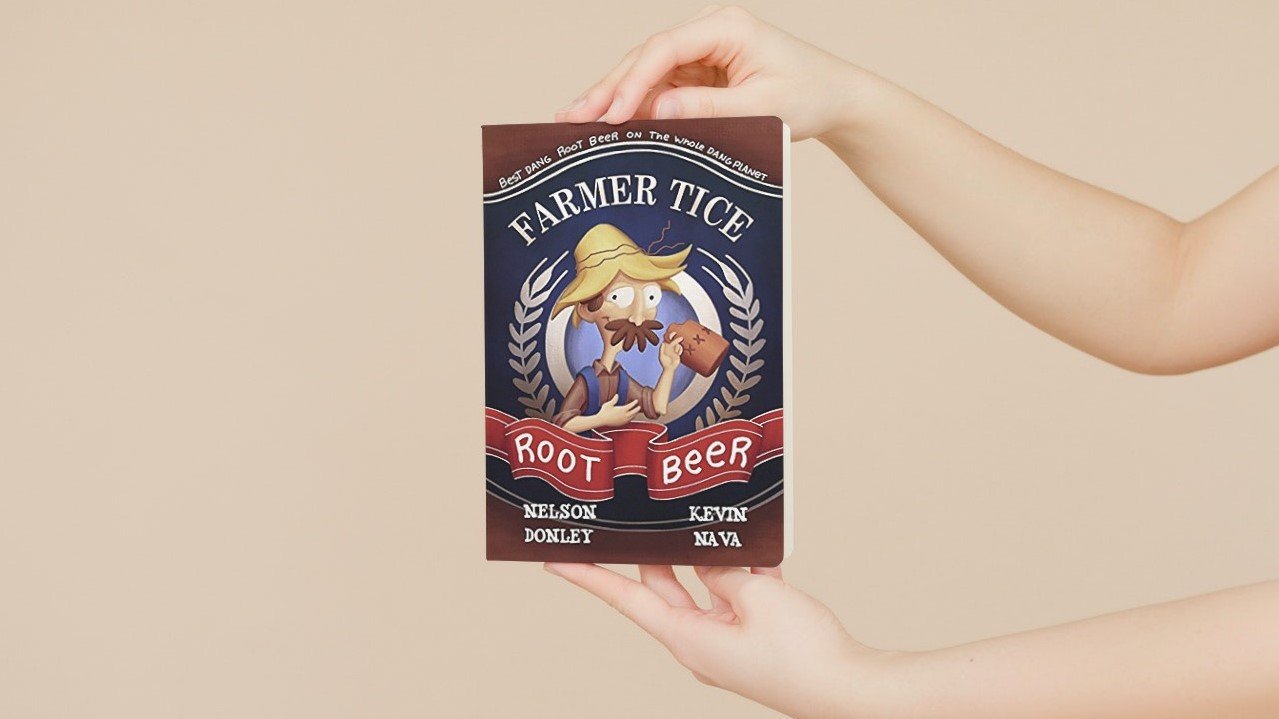 The world’s unluckiest man returns for his wildest misadventure yet! This time, Farmer Tice is turning an old family recipe into a million-dollar business. Of course, he can mess up a one-man parade even if he’s the grand marshal, and in FARMER TICE ROOT BEER, our hero gets plenty of chances to screw up royally. From his “good-fer-nuttin'” fishing buddies to Hokum high society, he sets the whole town on its ear. So kick back, grab an ice-cold sarsaparilla, and find out how Farmer Tice blows a sure bet one more time in Nelson Donley’s rip-roarin’, totally un-p.c. third book in this wildly original series.

Farmer Tice received a 100% positive KIRKUS BOOK REVIEW in August 2017. “All told, (Farmer) Tice is a dimmer Wile E. Coyote if thee ever was one, falling off cliff after cliff only to appear again for more torment. The fun of the book comes in seeing how high the next cliff will be and when exactly old Tice will stop falling. Albeit those falls are not for the squeamish. Regardless of one’s station in life, one can learn a lot from a farmer who won’t let his consistently poor luck keep him down. While unapologetically gross, the book is ultimately motivational in its own peculiar way.”

The sole purpose of this Farmer Tice book is for laughs. If a book is funny, it will be read again and again. There are no other objectives. You won’t find anything PC in this book. The stories evolved out of a slightly warped sense of subtle, sophisticated humor that’s akin to genre of Mad Magazine, National Lampoon, and The Simpsons . There are no hidden agendas nor lessons to be learned. It is just a fun book to read.

Farmer Tice was born on Friday the 13th. The year is uncertain, because nobody bothered to write it down.

Farmer Tice lives with his wife, Agnes , on a rickety old farm in a town called Hokum. If all farmers were like Farmer Tice, everybody would starve. His wife isn’t any better. How the two of them ever got married is explained in one of the chapters. Hint: they both were looking for matrimony at the bottom of the barrel at the same time.

Farmer Tice’s first name is Jacob, but everybody calls him Jinx, a nickname coined by Mother Tice who claimed he was a bad-luck baby.

Farmer Tice’s nephew is named Wessell, but everybody calls him “The Weasel”. It’s the perfect name for a scheming, tricky teenager like him.

Farmer Tune is a neighbor who is always taking advantage of Farmer Tice however he can.

Bum Park is way out on the east side of Hokum and is one of Farmer Tice’s favorite hangouts. The park was actually named after one of Hokum’s most distinguished founders, Horatio Alger Bum II, but that was a long time ago. In recent years it became a sort of sanctuary not only for the homeless, but for lazy farmers seeking sanctuary from their daily chores. Farmer Tice is there so much, some people think Bum Park was named after a bum like him.

Who exactly is Farmer Tice? Well, that’s hard to say. Some say he’s a mixture of Snuffy Smith and W.C. Fields. Others think he’s more akin to Homer Simpsonand Rodney Dangerfield. Personally speaking, I don’t think Farmer Tice is like anyone you are likely to find in any comic strip. He is a mold-breaking entity of his own.

So, enjoy these stories, and remember the whole point is to make you laugh. The stories are short and sweet and brings us into a world of locals and yokels unlike anybody you’ll ever meet.