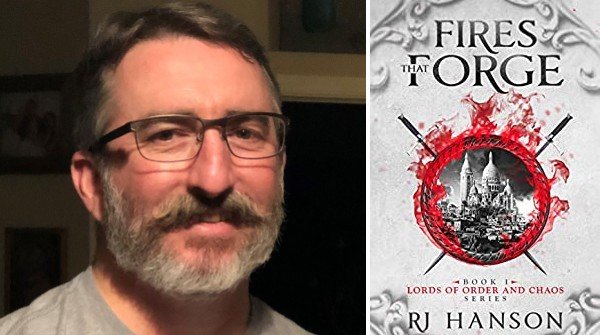 Murder. Betrayal. Magic? One knight takes up his hammer to hunt a killer concealed. When dark arts and faith face off, who can he trust while hunting a savage killer?

Kingdom of Lethanor, 1648. Inquisitor Dunewell stands strong in a city scarred by corruption. A true warrior for justice, the newly assigned investigator jumps into the fray when a close physician friend is accused of murder. Vowing to find the real monster, he enters a deadly race against time and the tip of the executioner’s blade.

Ordered by superiors to wrap up the case quickly, the honorable man-at-arms digs deeply into clues pointing to demons and forbidden powers. But as more aristocrats are found brutally slain and vampire attacks foment mayhem, Dunewell must hunt down a magical foe before his city falls into violent madness.

Can this knight-in-shining-armor defeat a master of shrouded evil?

Fires that Forge is the first book in the gripping Lords of Order & Chaos epic fantasy series, one of four series in the Bloodlines Reforged Saga. If you like thrilling mysteries, hidden enemies, and fast-paced action, then you’ll love R. J. Hanson’s sword and sorcery tale.

Buy Fires that Forge to spell out the darkness today!