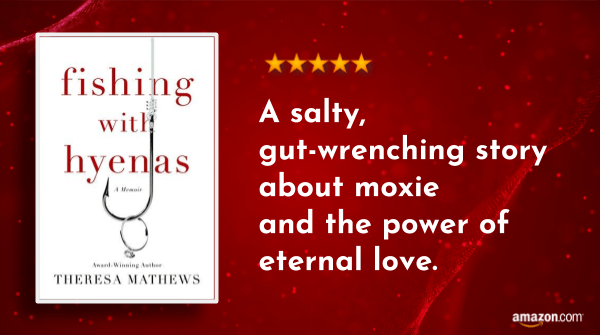 When city girl Theresa falls madly in love with commercial fisherman Captain Bart, she trades her urban lifestyle for a grueling job as crew on his ninety-two-foot-tuna boat in the North Pacific Ocean. During their three-month journey, she battles waves the size of four-story buildings in hurricane-force winds and almost loses her mind but wins the respect of the Hyenas—an elite group of fishermen who become her extended family.When Captain Bart dies at sea of a massive heart attack, Theresa must survive her worst nightmare and nearly drowns in grief and financial devastation. FISHING WITH HYENAS is a true story about the power of love, the pull of Mother Ocean, and overcoming loss.
Available on Amazon Goodreads

“Amazing that this is not fiction!”


That love-at-first-sight thing doesn’t happen often. This mystery requires the perfect alignment of the stars, the planets and hormones of two people who might otherwise pass on the sidewalk unaware. That’s where Theresa Dorsey Mathew’s story begins. “Fishing With Hyenas,” tosses the emotions as if you were on the rolling deck of a tuna boat with Theresa and Bart. No doubt many women will relate as Theresa follows her man into a world totally foreign to anything she expected life might throw at her. She gives it her all, pulling and butchering fish for three months at a time on the open ocean. “T” quickly accepted into a tightly-knit family of fishermen and women. Then comes the phone call that sends her to the bottom of her ocean. This emotional roller coaster of a true-life story flows like fiction. I can only imagine living this story. Read this book! – Walt Lowery, Bellingham, WA.

Theresa Mathews lives in the Pacific Northwest and works from her home office as a Corporate Recruiter. She always loved writing and applied that passion to her recruiting career, so in 1999 when her new love, Captain Bart, lured her to sea for a three-month fishing trip on the North Pacific Ocean, she decided she would write a book about her adventures. After seventeen years in the making, she now shares her story with the world. More info: https://theresa-mathews.com. Awards: Fishing With Hyenas won the 2018 Best Memoir by Pacific Book Awards. Fishing With Hyenas won First in Class for the 2017 Journey Award (narrative non-fiction), an international contest by Chanticleer Reviews. Fishing With Hyenas received national recognition by Independent Press Award as a Distinguished Favorite in the 2017 IPA Award for the memoir category.