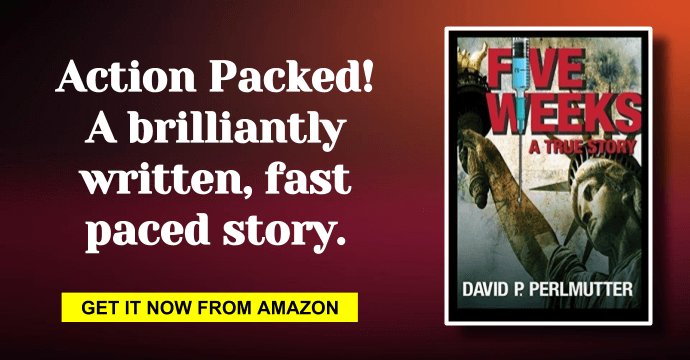 From the No 1 best-selling author who brought you WRONG PLACE WRONG TIME and 24 HOURS IN NEW YORK, another gripping true story charting FIVE WEEKS when, having already had a gun in his back in London, he soon finds himself almost left for dead in a Pennsylvanian forest.
REVIEWS FOR FIVE WEEKS…..

‘I have read Dave’s other book WRONG PLACE WRONG TIME and throughly enjoyed it, so when I found out he’d written FIVE WEEKS I jumped at the chance to read it.’

‘FIVE WEEKS is equally as entertaining as WRONG PLACE WRONG TIME, the story’s about a dream job in America that turns into a five week nightmare where he’s fled for dead in a Pennsylvania forest.’

‘David’s life would be equally as exciting if it was a prime time to show or a hit movie.’

‘I read WRONG PLACE WRONG TIME and FIVE WEEKS equally good (if not better), fast-paced true story of the innocent North London estate agent coming a cropper in the States. A scenario, which is one of my personal nightmares.’

‘The writing is witty and highly original. Read the first chapter and you’ll be hooked.’

‘Having read the authors first book, WRONG PLACE WRONG TIME which I loved, I had to read this and WOW.This is a great story and one yet again I will recommend.’

David P Perlmutter lives in London, England. He is the very proud father of four children and has one grand-son. David is exceptionally close to his large family, which includes four brothers and one sister, who all live within a 10-mile radius of each other.

It was while living in Portugal several years ago, that David started to write his first book, Wrong Place Wrong Time as a blog, but a friend who read the first couple of chapters, told him it was too good for a blog, it must be a book. Since then this book has become a #1 BESTSELLER on Amazon with hundreds of 5* reviews and has been traditionally published and is in most major book shops.

David’s second book, Five Weeks, is another true story and catalogues a trip to America during which he was almost left for dead in a Pennsylvanian wood.

Apart from writing, David spends a lot of time promoting and marketing authors across the world on his social media platforms.

He has written eight books on marketing for the indie author in his My Way brand, which can be found on Amazon and on his website.

David is a volunteer Cancer Campaigns Ambassador for Cancer Research UK, working with his local MP and the media on cancer related policy issues and campaigns. He also raises money for the charity by arranging book signing events at CRUK shops all over London and the home counties, donating a percentage of book sales.

David enjoys engaging with his 40,000 plus followers on Twitter @davepperlmutter and invites all his readers to join him there in ‘conversation’.

OTHER BOOKS BY DAVID P PERLMUTTER

My Way Four – May The 4th Be With You

My Way To Getting Published

“Another fun read from David P”


Another fun read from David P. Perlmutter. This guy has an enviable honesty and ability to write about his misadventures in the most entertaining way. I came to his work initially because we share the same name, but I’ve stayed a fan because I am much happier with his hair being torn out and nose broken than mine. It’s like having a dream life, but you can remember it in the morning. Hats off to you, brother David Perlmutter, but I’m not sure how many more times I can take you getting a beating.

Hello and thank you for visiting my author page.

WRONG PLACE WRONG TIME is my first book & is based on true events. The success of Wrong Place Wrong Time has been mind blowing and the reviews from readers around the world has been a wonderful surprise. Over 450 reviews with over 300 x 5* & 100 x 4* reviews across Amazon. The book has also been #1 in True Crime in America & is currently #1 in Biography.

My second book, called MY WAY is all about book marketing and has received over 100, 4/5* reviews from authors who have said that the tips have helped increase book sales and gain wider exposure on the social media scene.

My third book is called FIVE WEEKS, another story based on true events and about my visit to America where I’m nearly left for dead in Pennsylvania.

Also I have written:
MY WAY TOO
MY WAY FREE – TRENDING ON TWITTER
MY WAY FOUR – MAY THE 4TH BE WITH YOU
MY WAY 5 About LIFE
MY WAY 6 – SEX FOR THE BEACH

If you do download any of my books I hope you enjoy.

Be one of my 33,500k followers on twitter! @davepperlmutter

This biography was provided by the author or their representative.