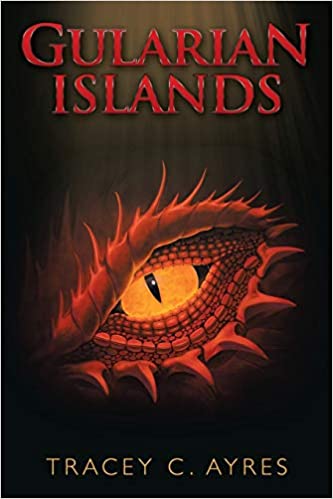 In Gularian Islands by Tracey C. Ayres, 14-year-old Ben Mason and his friends, Gary, Izzie, and Dolly, find themselves in an exciting, overwhelming adventure when the plane carrying them from the United States home to Australia crashes into the ocean near some islands. After the shock of the accident wears off, the passengers break into groups to look for supplies that can be used until they are rescued. At first, the exotic islands, cliffs, and cave tunnels are wonderful for the teens to explore, but then they notice strange things happening that they can’t explain. They start to realize they have a mystery to solve when they see a gigantic creature swimming and diving in the ocean. Everyone guesses what they think it is and begin to get scared, but Ben tells them it’s a silver dragon. He wants to look for her lair in the caves, and when they do, they find a nest of eggs. Ben senses they should leave them alone, but Gary secretly takes one. Not much later, Ben realizes Silver the dragon is not after them. She’s upset about her missing egg and is in danger herself because an evil dragon named Black Knight has kidnapped her mate, Goldevere. All of these dragons can take on a human form sometimes, so rescuing Goldevere and capturing Black Knight will be especially risky. The teens know they need extra help, but the more they see how the passengers interact with one another and the more creatures they meet along the way, the more they question who they should trust. Every decision they make requires them to take a chance, so the book winds up being an imaginative thriller with surprises on every page. Opinion: Gularian Islands is fun to read because it blends the qualities of a fairy tale with elements from our own modern-day world. It’s easy to read and has great descriptions, which helped me feel like I was part of the adventure too. Several sub-plots make the story interesting and suspenseful. It’s impossible to guess what will happen next. With the exception of Ben who has a good heart and Black Knight who is evil, I constantly wondered if the characters and creatures would be trustworthy with each other through to the end. Anyone 12 and up who likes fast-paced fantasy would enjoy this story. Reading about a plane crash and the evil Black Knight might be scary for elementary-age kids, but I think teens would like all of the twists and turns of this book. I received a complimentary copy of this book in exchange for an honest review. Another LitPick review In Gularian Islands by Tracey C. Ayres, a teenager named Ben and his best mate, Gary, go on a plane trip back home to Australia from America. As the plane is flying over the Atlantic Ocean, it suddenly begins to lose altitude, forcing everyone to abort the vessel. Luckily, there’s an island nearby, and everyone is able to get to it with only scrapes and bruises. Once everyone is safe, Ben notices two men with them he didn’t remember seeing on the plane. They look as if they’re both in the army; they swim well, one has a knife that wouldn’t have been allowed on the plane, and they both have an aura of leadership surrounding them, but can they be trusted? One day, Ben and Gary are out looking for food when they see a dragon-shaped silhouette over the ocean. Then they find a cave with a nest of eggs twice the size of an ostrich’s. At this, they realize the dragon isn’t fake or a vision their minds created. It’s flesh and blood. Read Gularian Islands to find out if Ben, Gary, and the entire host of passengers survive these islands of dragons. Opinion: Gularian Islands by Tracey C. Ayres is a great book, and I hope to be able to read the second book as soon as it comes out. The book itself is a quick read, but the content and quality of the book far exceeded what was expected. In the book, the characters are expressed in great detail, further adding to the quality of the book. The plot was amazing; there were two sudden twists I wasn’t expecting, but they fit right into the storyline. This is a wonderful book to read, and I would recommend it to any readers ages ten through twelve. 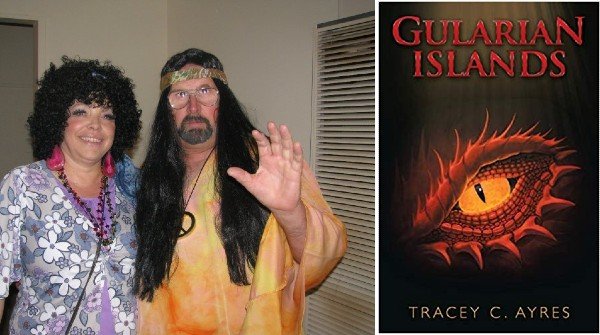 Fourteen-year-old Ben Mason has known for some time he’s a little bit different than other people. It isn’t until traveling back to Australia from a holiday in the United States he discovers just how true that is. Ben and his friends are flying home when their airplane crashes on a remote island. Guided by the captain, the passengers try to stay alive and safe until rescue arrives. But Ben feels strange things happening. Soon he meets a boy named Noke who saves Ben from drowning and a swarm of killer bees. Then, twenty-six days into their ordeal, Ben meets Goldevere, a prisoner of the dragon, Black Knight. Goldevere tells Ben he has the gift that can help both of their people and that he needs to find his wife Silver for help. They must work quickly to save the world from the angry black dragon.

Tracey C Ayres writes action-packed mysteries which are fun and exciting for young readers. Best known for her book Gularian Islands (the one with the blinking dragon eye on Youtube) which received an incredible five stars LitPik review. She has written five books so far and due to intense response is currently working on turning Gularian Islands into a series of books with strange out of this world adventures. Tracey was born in England where she grew up with two older sisters and three younger brothers. Studied childcare, social work and psychology and wrote for a local newspaper but now loves her current job the best and that is writing stories for the younger generation. Living in Australia with her husband, daughters, grandchildren and a menagerie of pets she loves to find a shady tree and lose herself in her adventures while writing. Most of her books have heroines or heroes, and her characters are intrepid, quick-witted and smart, and sometimes they are even fearless. Because Tracey believes when we lose ourselves in a story, our imagination should hold no barriers. Want to find out more about Tracey C Ayres and her books visit her interactive website at https://www.traceyayres.com.
Dear Reader, author’s recently published book “Gularian Islands” is now available on leading bookstores, get your copy now and help the author by writing a review of the book.
Available on Amazon