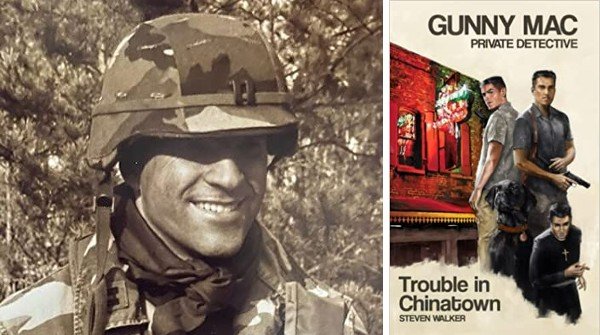 It is 1942, the First Marine Division is fighting for its survival on Guadalcanal.

President Roosevelt orders all the money in Hawaii collected, destroyed, and replaced by money with Hawaii written across the back of each bill. Funny money that the Japs can’t use if they invade the Hawaiian Islands; if Guadalcanal falls.

Millions of dollars collected and some of the money is about to be taken by anybody who is somebody.

LT. Commander Kincaid, a drunk, thief, and gambler is in charge of destroying the money, has his own plans on what to do with some of the money.

But one man is standing in his way. A bayoneted, shot up Navy Cross winner, hero of Bloody Ridge…a man who hates what he is forced to become…a civilian. Awaiting a medical discharge, Gunny Mac is lost without his Marine Corps. He buys a two- dollar book on how to be a private eye…and Chinatown will never be the same.

But sometimes you have to throw the book away…

But he’s not alone. His fellow wounded Marines, at the naval hospital, now out of the fight, have lots of fight left in them.

Mac’s best friend, Gunny Wojohowitz, needs Mac to help him track down the one man he needs to kill…

LT. Burke a Naval officer…a wealthy, spoiled Harvard graduate who is sent to the Marines as an Artillery Forward Observer as punishment, seeks forgiveness and redemption and drags Mac deeper into the corruption of Chinatown.

They shed their blood and their human psyche, but they face one more battle for their country, and for their friends. One last battle…one last victory!