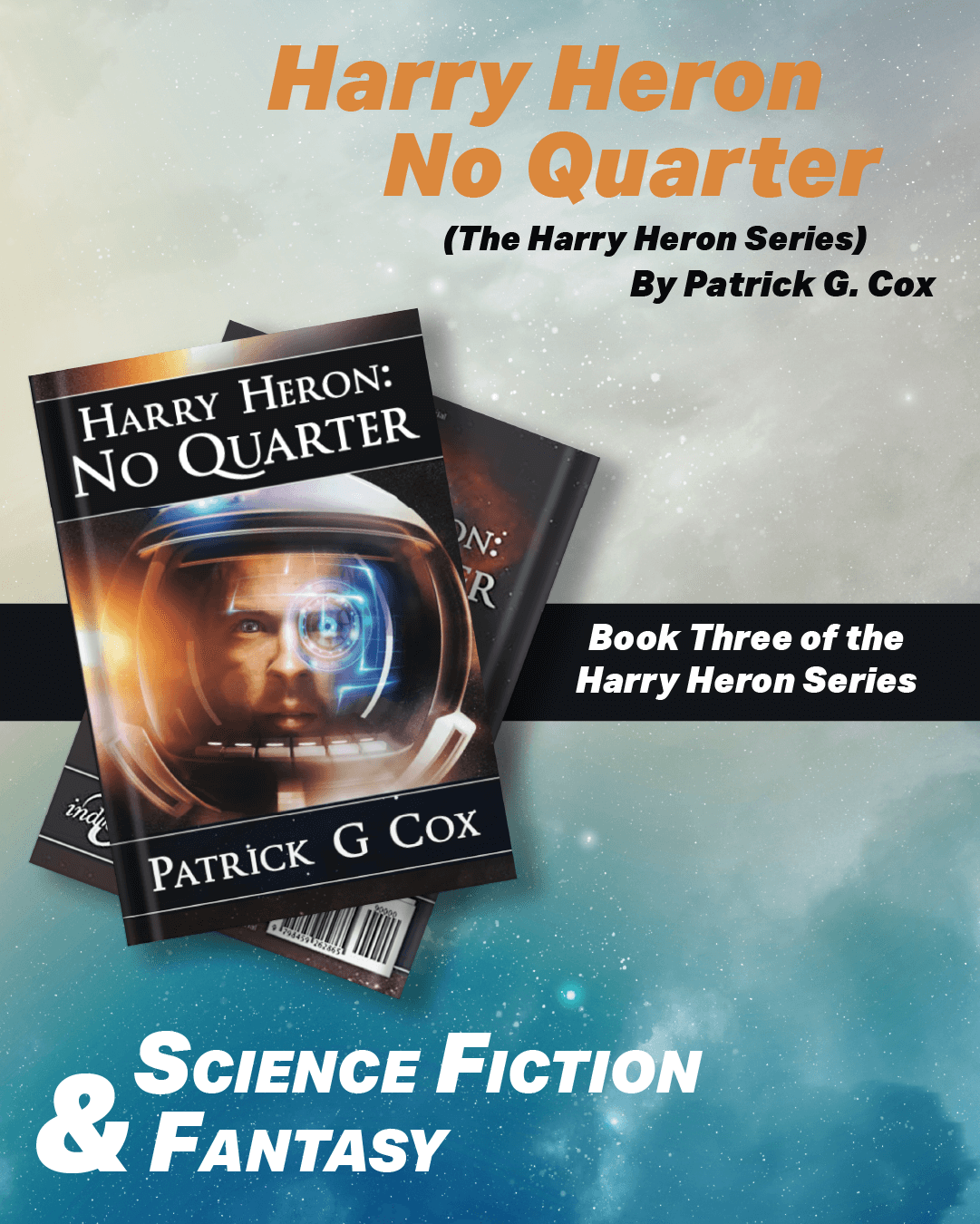 In Harry Heron: No Quarter, Book Three of the Harry Heron Series, Harry and his best friend Ferghal O’Connor are cadets at Fleet College, eager to master their skills in preparation for commissioning to a ship. They’ve barely stepped foot on campus when they realize they’re targeted and sabotaged at every turn, but this doesn’t stop them from exuberant participation in the Sailing Regatta, the Gun Run, and the usual flirtations and hijinks of college life. Meanwhile, the Consortium, supporting the Johnstone Group, does everything in its power to keep them from testifying at an enquiry to expose Johnstone’s questionable research practices that nearly killed Harry in their secret laboratory on the planet Pangaea. No quarter given, none asked, Harry and Ferghal overcome every obstacle with youthful vigor and optimism, intelligence and training, and prove valuable to the Fleet as junior officers of the NECS Leander in the ongoing struggle against the Consortium.

About the Author: Patrick G. Cox

Patrick Gray Cox has had a long fascination with the sea and ships, as well as the world of science fiction and space travel. Born in Cape Town and educated at Selborne College in East London, South Africa, Patrick is a published technical author and lecturer, and a retired firefighter after thirty-six years of soot, heat, blood, sweat, and laughter. He is a Licensed Minister in the Church of England and has three adult children and three grandchildren of whom he is enormously proud.

He has a number of published articles in trade journals and continues to write in a freelance capacity for the Fire and Rescue Journal among others. His portfolio includes a large number of commissioned articles on fire service matters, a book on Marine Fire Studies and the editing of a handbook for the NEBOSH Certificate in Fire Risk Management. His technical books include the IFE Guide to Fire Investigation published in 2011 and The Fire Service Leader’s Pocket Book published in 2017. He has appeared on television programmes in the past as a fire-fighting expert including Ring of Fire for the Discovery Channel about fighting bush fires in Australia, and he had a similar role as a commentator on Inside Spontaneous Human Combustion in 2005 for Sky1.

His popular historical romance, A Baltic Affair, is set in the latter stages of the Napoleonic Wars in the Baltic area against the background of Napoleon’s attempt to strangle British trade with its Northern European allies, the repercussions of which still echo down the years.

Limehouse Boys takes readers to the grimy, gritty streets of the East End of London in the 1830s and follows the struggles of three orphans caught up in a web of crime, corruption in high places and poverty. With the help of friends among the watermen of the river, they find a niche in which they can change the fate intended for them by those with money and power.

Magnus Patricius: The Remarkable Life of St Patrick the Man, is a fictionalised biography of St Patrick, one of his heroes. Preparation to write this tribute work to the saint took much time and involved reading a very wide range of matters related to the period in which St Patrick lived, the events he would have witnessed, the cultures, the peoples, and of course, as many academic studies of the man and his work he could access. While only two documents survive that are authenticated as being the words of Patrick himself, these are supplemented by a veritable library of other works believed by many to be either based upon or inspired by Patrick’s own writings.

Harry Heron: Midshipman’s Journey, is the flagship book in the Harry Heron Adventure Series. Entirely a work of 19th century British naval fiction, this coming-of-age story follows the career of Midshipman Harry Nelson-Heron and his friends Ferghal O’Connor and Danny Gunn aboard the 74-gun HMS Spartan on a voyage to Australia and the East.

Harry Heron: Into the Unknown, the second book in the series, captures the exciting action as Harry, Ferghal and Danny are accidentally propelled through a time warp four hundred years into the future from 1804 to 2204. Through wits, skill and intelligence, they quickly assimilate into the North European Confederation Fleet and adapt to the world of spaceships and colonies on distant planets.

Harry Heron: No Quarter captures Harry and Ferghal’s adventures and challenges in Fleet College and their early days as newly commissioned Midshipmen.

Harry Heron: Savage Fugitive finds Harry, Ferghal and others fighting for survival on an alien world against the forces of the Consortium.

In the final two books in the series, Harry Heron: Awakening Threat, and Harry Heron: Hope Transcends, Harry and his friends face a dangerous predatory race, which has the potential to wipe out the human race and in the final adventure Harry is the target of assassins and their alien allies.

His most recent book is Captain James Heron: First Into The Fray, the prequel to the Harry Heron Series in which the readergets to know Harry’s twelve times great nephew as he prepares his new ship for service. Captain Heron has no easy task as, recently bereaved, he must face sabotage and is drawn into a game of double bluff between Fleet Security and a shadowy organisation known as “The Pantheon” engaged by the Consortium, the looming enemy.