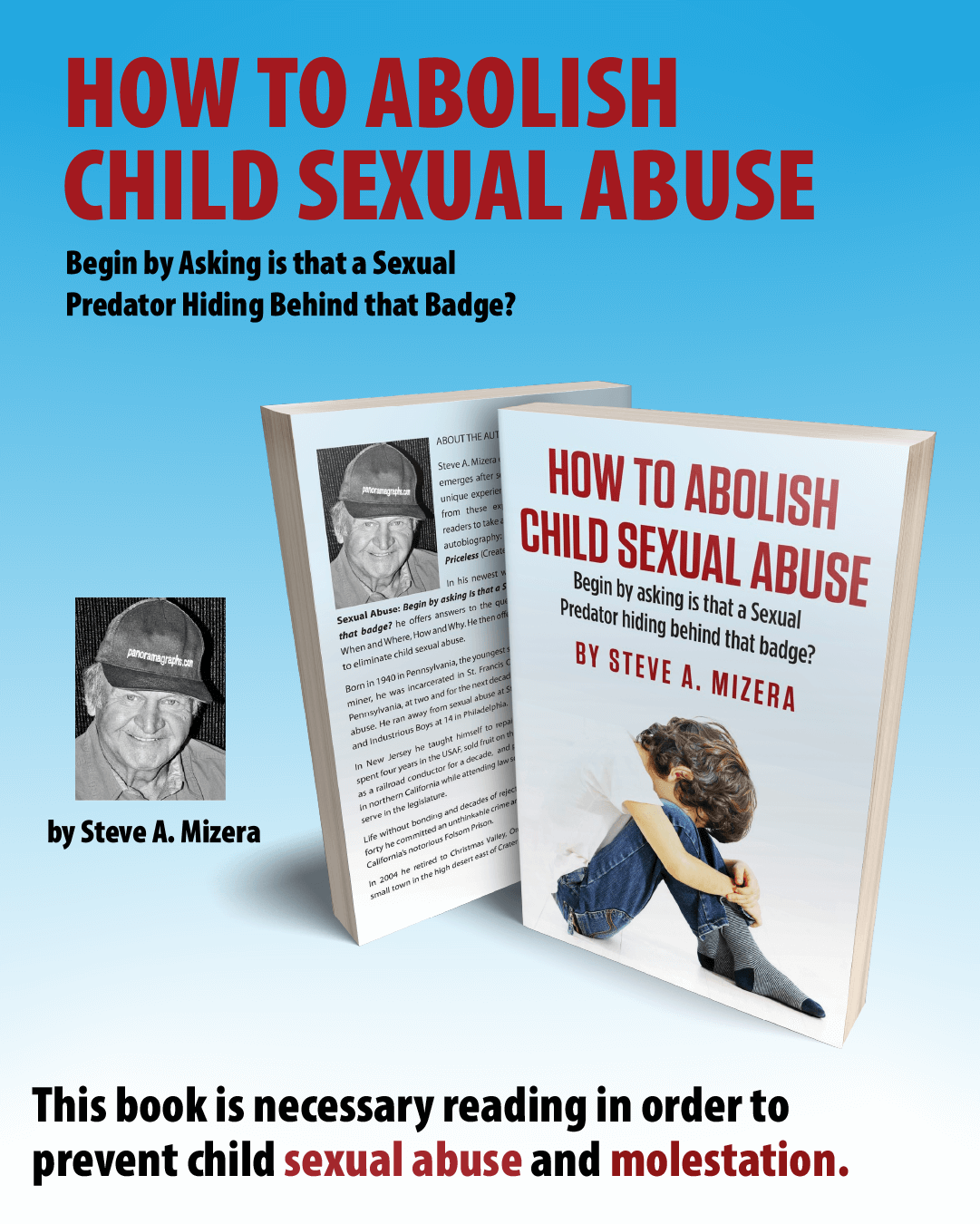 How to Abolish Child Sexual Abuse

Begin by asking: Is that a Sexual Predator hiding behind that badge?

Why read this book?
From an early age we are taught to respect and trust police. Most of us do. But today we watch the evening news or read that another policeman has molested a child, or was caught with child pornography.
We begin to question our reason to trust. How is the molestation or the sexual abuse of children to be anticipated and stopped?
At the age of seventy-two I believe I have found answers to the questions: who molests children, where and when, and how and why?
But most important I offer recommendations on what must be done to prevent child molestation. In contrast, I examine and explain why what is being done today is not working.
Really good computer hackers eventually get caught and go to prison. Some then offer their experience to corporations and get paid well to prevent hacking.
Those in favor of hiring hackers (and the hackers hoping to be hired) will argue that “it takes one to catch one.” However, you don’t see law enforcement agencies hiring former murderers to help them catch violent criminals. So It all comes down to a question of trust.
I was physically and mentally abused as a child in an orphanage, and sexually abused in a second orphanage. I grew up to commit a similar despicable act for which I was convicted and spent time in the notorious Folsom State Prison.
This book is part of my effort at redemption. I examine many of the news stories that shock those who hear or read that yet another trusted man with a badge has violated that trust and destroyed a child’s life. In rehashing these news reports I am not anti-police, but I am anti-child sexual abuse.

About the Author: Steve A.Mizera

ABOUT THE AUTHOR Steve A. Mizera endured endless hardships and emerges after seventy-two years to share his unique experiences. It is the lesson he learned from these experiences that he wants readers to take away after reading his powerful autobiography: From a Dime a Dozen to Priceless (CreateSpace, Amazon.com). In his newest writing: How to Abolish Child Sexual Abuse Begin by asking Is that a Sexual Predator hiding behind that badge? he offers answers to the questions Who molests Children, when and where, how and why, and he offers recommendations intended to eliminate child sexual abuse. Born in 1940 in Cressona, Pennsylvania, the youngest son of a Russian, immigrant coal miner, he was incarcerated in St. Francis Orphan Asylum in Orwigsburg, Pennsylvania, at the age of two and for the next decade, suffered mental and physical abuse. He ran away from sexual abuse at St. Joseph’s House for Homeless and Industrious Boys at 14 to live on the streets of Philadelphia. Having a strong work ethic he is called a Dime a Dozen by a heartless employer. Steve retaliates by stealing $25,000 in tires in 1956 from Gimbels department store. He fled to Sea Isle City, New Jersey where he taught himself how to repair automatic transmissions. He spent four years in the USAF, sold fruit on the international market for four years, worked as a railroad conductor on Southern Pacific RR and Amtrak for a decade, founded and published a weekly newspaper in a small northern California town for two years while attending law school before going to Alaska to serve in the legislature. Starting life without bonding and winding through decades of rejection and failed relationships, at forty he committed an unthinkable crime and was sentenced to 20 years in California’s notorious Folsom Prison. Following his release he spent two decades in public service. Although raised with a bleak view of the world, it is how his life was transformed at the age of sixty when he was informally adopted by loving immigrants who lead him away from a life of crime, and taught him about the love of Jesus Christ, who became his personal Saviour and redeemer.. In 2004 he retired to Christmas Valley, Oregon, a very small town in the high desert east of Crater Lake. In retirement he pursues photography creating vistagraphs (see vistagraphs.net)- large panoramic scenic views printed on canvas. He adopted the RV life style and lives and travels in a roomy Winnebago. –This text refers to an alternate kindle_edition edition.