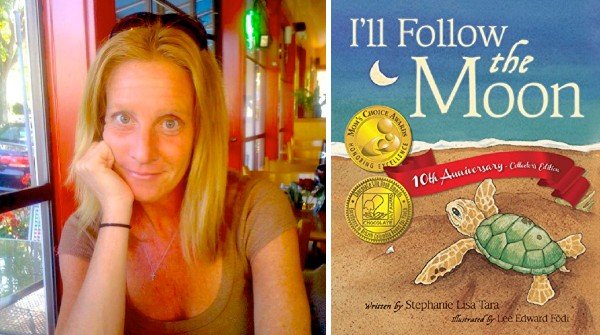 OVER 2 MILLION COPIES SOLD–Double-gold medalist begins simply in baby sea turtle’s voice:“I’m coming Mama, I’ll see you soon, I know just how, I’ll follow the moon.” Celebrating the love between mother and child comes an achingly beautiful story that has captured hearts around the world. Written by a new mom, by accident, when she sang a little song to her fussing newborn, I’ll follow the moon donates to charity: every book saves a turtle.
“[G]orgeous watercolors chronicle the journey of a baby sea turtle from its hatching to its first swim in the sea.” –Kirkus Reviews
“[C]aptivates children with poetry…” –New York Times
“[A] tiny one-inch hatchling teaches the world about courage…utterly magnificent…” –San Francisco Chronicle
“[B]aby turtle wins hearts everywhere, expect your kids to hug you tightafterthe first read…expect to be asked to read again and again and again…” –USA Today
“[I]’m coming Mama, I’ll see you soon, I know just how, I’ll follow the moon…we can’t get baby turtle’s song out of our heads….achingly sweet little bedtime book for wee ones.” –Huffington Post
“[N]o surprise at all that this book has a worldwide toddler-cult following…baby turtle serenades us all so sweetly with his song of home. Proceeds to turtle charities too!” –National Geographic
“[H]ats off to this turtle hatchling who has garnered millions of fans across the planet…a tiny activist who is saving his own kind…bravo.” –World Wildlife Fund
“[S]tephanie Lisa Tara and Canadian illustrator Lee Edward Fodi have teamed upto create a lyrical rendition of a green sea turtle’s first glimpse of life. Hatched on a moon-washed beach, the baby turtle finds its way by instinct across the expanse of sand to the sea and a rendezvous with its mother. Written in simple verse in the first person, the rhythmic text is full of action and sensory detail and loaded with alliteration and onomatopoeia for an enjoyable read-aloud. The refrain, “I’m coming, Mama,” repeated on each double page spread, is soothing and reassuring of the joyful reunion to come. The atmosphere of a quiet but determined struggle to break free of the egg soon gives way to growing excitement as the turtle mingles with fellow hatchlings and catches his first tempting sensations: the smell of salt air, the sight of the moon’s glow, the gentle touch and beckoning sounds of the waves rushing to shore. Once he’s free of the land, new motions take over: gulp, spin, float, swim…The final happy refrain is new and satisfying: “I’m here, Mama – here with you. I know I’d find you, Moon did too. “[F]ramed by endpapers of soft, limitless, under sea green,Fodi’s delightful illustrations feature an animated and engaging baby emerging from an egg buried in golden sand. With other tiny turtles, heis shown plowing through the damp sand, sampling the salty sea air and marching unerringly toward the moonlight glimmer, his guide to the ocean. Once afloat, he soon comes face to face with “eyes like mine” in his new watery home. The gold of sand, blue of sky and green of the sea repeated throughout the book bring a sense of harmony. The turtle is the focal point of all the pictures. The illustrator has carefully integrated the turtle’s actions with Tara’s verse which relies heavily on verbs: roll, slide, tumble……crawl, scoop, shove. Young children will be propelled through the story in the illustrations as well as the text.” *Highly Recommended. Gillian Richardson, who lives in BC, is a former teacher-librarian and freelance writer. —Canadian Materials Magazine, Gillian Richardson
“[I]n this tranquil bedtime story, a baby sea turtle hatches on the beach and wants to find his mother. And he knows just how — he’ll follow the moon! From his gentle struggles to break free of his egg to his determination to dig his way out of the sand nest, we follow the baby sea turtle on each step of his instinctive journey home.” Very highly recommended. –Books of Wonder