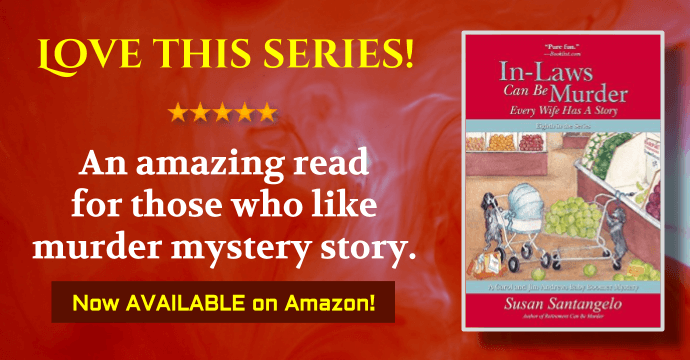 “ ‘In-Laws Can Be Murder’ is the eighth in Susan Santangelo’s Baby Boomer Mystery series, and as hilarious as all the rest!”
—Carol J. Perry, Author of the Witch City Mystery series

Carol Andrews doesn’t share well. Especially when it comes to her precious, long-awaited first grandchild, CJ. So when her son-in-law’s pushy mother, Margo, arrives in town and horns in on Carol’s happiness, it’s hate at first sight. But when Margo thinks she’s committed a murder and reaches out to Carol for help, then vanishes without a trace, it’s up to Carol to put aside her petty jealousy and crack the case before the police get involved.

“Carol Andrews’ role as Only Grandma to her newborn grandson is dashed when her son-in-law’s long-lost mother makes an appearance. The woman takes off again, but sends Carol a plea for help. Soon Carol, her family, and three best friends are involved in murder and mayhem. ‘In-Laws Can Be Murder’ is another zany Baby Boomer romp, one not to be missed!”
—Allison Brook, Author of the Haunted Library Mystery series
Available on Amazon Barnes & Noble Goodreads


Susan Santangelo has done it again. Her main character Carol Andrews has solved yet another murder mystery while becoming a first time grandmother. Entertaining and endearing. I feel as if I know all of her characters and could live across town from them. Ending was a surprise to me. Don’t miss this one. Easy enjoyable summer read

Welcome to my Amazon author page. I’m the author of the humorous Baby Boomer mysteries, which follow the adventures of Carol and Jim Andrews as they navigate their way along life’s highway toward their twilight years. With one dead body thrown in, just to keep things interesting. Here’s a little information about me. I’ve been a feature writer, drama critic and editor for daily and weekly newspapers and magazines in the NY metro area. I’m a member of Sisters in Crime, International Thriller Writers, and the Cape Cod Writers Center, all great resources for mystery writers. Here’s the published titles: “Retirement Can Be Murder,” 2009 (has been suggested for a tv series — I’m still hopeful!); “Moving Can Be Murder,” 2011; “Marriage Can Be Murder,” 2012 (features a destination wedding on Nantucket and was chosen as one of Suspense Magazine’s 2012 Best Mysteries); “Class Reunions Can Be Murder,” 2013 (this one takes place at Carol’s 40th high school reunion); “Funerals Can Be Murder,” 2014. Book 6, “Second Honeymoons Can Be Murder,” takes place in Florida and was released on February 16, 2016. The subhead for each of the titles is “Every Wife Has A Story.” My six-year-old English cocker spaniel,Boomer, is the cover model for the books. He’s quite the handsome guy. And a photo of our newest addition to the family, Lilly (AKC name, “My Pulitzer Prize”) graces the back cover of Book 6. There are at least 5 more books planned in the series, so stay tuned