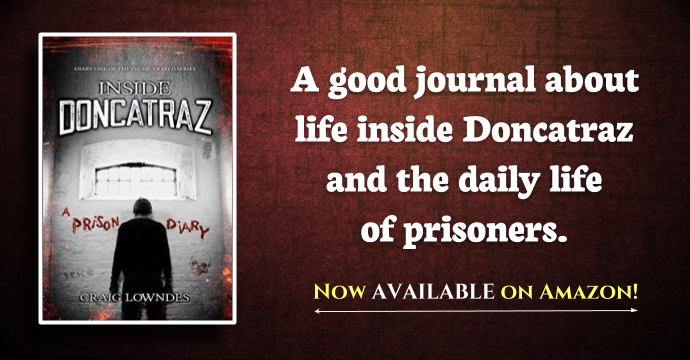 A first time prisoner recording the day to day experiences of life inside one of Britain’s privately run jails.
Available on Amazon Goodreads


A fascinating insight into prison life. Some truly unbelievable stories told in a light hearted manner. It really opened my eyes to what really goes on inside one of Britain’s prisons. I’m really looking forward to reading volume 2 “Sutlins” and finding out what life is like inside a category D prison.

Craig Duncan Lowndes was born in May 1976 in Staffordshire. By the time he was twenty-nine, Craig had made his first million and retired to a life of sun, sea and sangria on the island of Tenerife; Seven years later, due to some disastrous investments, poor life decisions and the Spanish property crash – his hard-earned money was gone. Cunningly, he used his knowledge and business acumen to make money through illegal means.
Unfortunately, Craig’s luck ran out in 2014 when he was sentenced to a four-year prison sentence for masterminding a £1.8 million VAT fraud; he served the first six months of his sentence in HMP Doncaster, where he recorded the day-to-day life of a first-time prisoner.
‘Doncatraz- A Prison Diary’ – Craig’s first success at writing, which was published in 2016, while he was still serving the remainder of his sentence in HMP Sudbury.
Remorseful of his actions in what he refers to as his former life, now Craig works as a full-time plumber but still manages to put time aside for writing. After a huge amount of success, with the prison diary – which sold in its thousands – Craig tried his hand at crime fiction. He used his criminal experiences along with some of the characters he encountered in prison as inspiration for his books. Craig’s first fiction book ‘Screwed’ was published in 2017 with the prequel ‘Vodka And Tonic’ scheduled for November 2018. Craig uses ‘being there, seeing it and doing it’ to inspire his works of fiction.