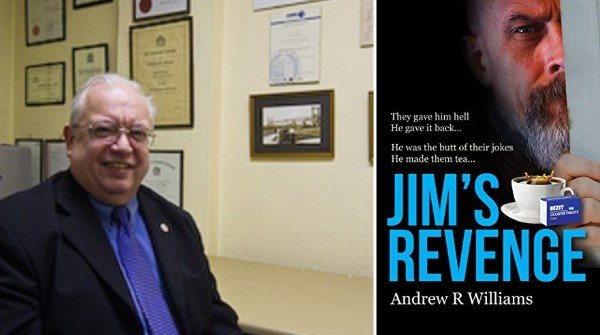 Poor old Jim. He just wanted a part-time job, but finds himself dragged into the local underworld; bullying, drug dealing, and race-fixing. What else could happen?

So, after reading A R Williams’ First 2 Arcadia’s Children novels and eagerly awaiting the third I was somewhat surprised when this book appeared on my “because you read” on my kindle. “Jim’s Revenge” is a pretty far departure from the two previous books. There isn’t a killer mutant space millipede or psychotic robot to be seen anywhere. Instead we get the epic tale of an elderly bloke who gets a part time job making brews for a bunch of office workers. Yep, you read that correctly. Now obviously it isn’t as simple as that hence the “revenge” bit in the title. But I’d rather not spoil anything here except to say that Andrew R Williams has proved here, like many a good writer, that he isn’t limited to a certain genre. Also his gift for writing really likeable, and dislike able characters is well intact! Jim our elderly hero is the sort of bloke you see in your local pub and have a beer with. He’s the next door neighbour who you ask your parcels to be delivered to when you aren’t going to be in. The high point of his day is feeding the ducks.

Meet Andrew R. Williams By day mild mannered Andrew R. Williams is a chartered surveyor…. but after twilight falls, he snatches up his pen and the writing takes control. Jim’s Revenge has now been published.The Arcadia’s Children series will very shortly have a third installment. When he isn’t writing, or surveying , Andrew spends time with his wife Geraldine, staring up at the stars, and plotting eventual world domination. Don’t let that calm demeanour and easy smile fool you, oh no.

Bullying, drug dealing, and race-fixing. What else could happen?

Dear Reader, author’s recently published book “Jim’s Revenge” is now available on leading bookstores, get your copy now and help the author by writing a review of the book.
Available on Amazon