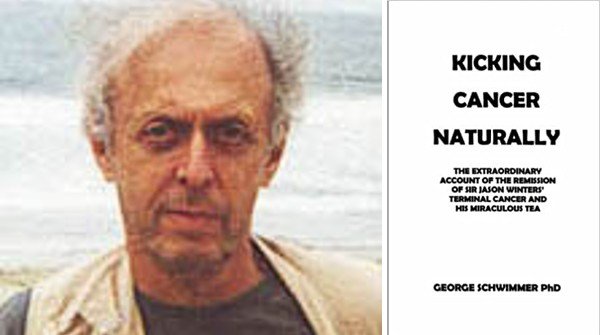 This is the extraordinary account of the cancer remission of a man told he would be dead in two or three months, what he decided to do, and the almost miraculous tea that he accidentally created, which paved the way for his cancer’s disappearance, never to return…..

But that’s not all, for when he revealed what he had found, tens of thousands of people from all over the world beat a path to his door to beg for his tea. Countless others had the same result drinking the tea as Sir Jason Winters. ….

Not only is Sir Jason’s story told in this little book, but others’ accounts over a period of forty years of full recoveries from terminal cancer as well, as a result of drinking Sir Jason’s tea…..

The tea appears to have saved tens of thousands of lives, with ingredients that were mentioned as medicines in the Bible, by Buddha, by Krishna and by Hippocrates, as well as used by Native Americans, the gypsies of Europe and aborigines…..

This is one of the most unusual and uplifting stories of natural healing ever told in modern times.