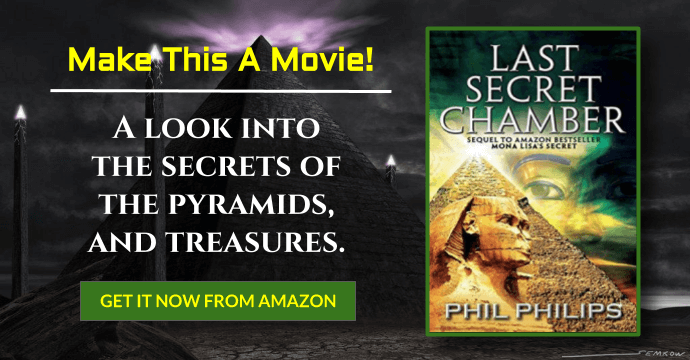 Where is ancient Egypt’s last secret chamber, and what is concealed within?

When an archaeologist is murdered in his Cairo apartment, an ancient artefact is stolen from his safe – one believed to hold the clue to the last secret chamber.

When Joey Peruggia discovers that the dead man was his long-lost uncle, he travels with his girlfriend, Marie, and his friend Boyce, who works for the French intelligence, to Egypt, on a mission to find answers.

But once they arrive, they are lured into a trap and become hostages to a crazed man and his gang of thieves. This is a man who will stop at nothing to discover what lies in the last secret chamber.

All bets are off, and only the cleverest will survive this deadliest of adventures.

In this elaborately plotted, fast-paced thriller, Phil Philips takes you on a roller-coaster ride through Egypt’s most prized structures on the Giza plateau, to uncover a secret hidden for thousands of years …

˃˃˃ Question: Who would I recommend this book to? Answer: To anyone who loves ancient Egypt, a history buff, an adventure junkie, and/or obsessed with history’s greatest mysteries.

˃˃˃ A SECRET KEPT HIDDEN IN THE SANDS OF TIME …

Scroll up and grab a copy today.


Great story line. I’m not usually a fan of sci-fi but enjoyed this book. Will be watching for other writings from Phil Philips.

Phil Philips is driven and passionate, known by friends and family as a renaissance man, into anything and everything. Phil comes from a vast digital media background with over seventeen years working in the advertising industry. Phil thrives to create pieces of artwork, whether it’s designing a magazine layout, building websites, editing a video composition, painting in oils, or writing page turning thriller novels.

Phil’s writing style has been linked to Dan Brown and Matthew Reilly.

Phil lives in Sydney, Australia with his wife and two kids and is the author to two action packed thriller novels Fortune in Blood and Mona Lisa’s Secret. The third novel will be out mid 2018.