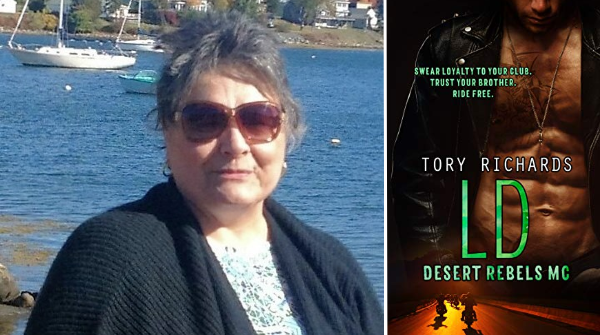 She was a fucking goddess, the kind that men would go to their death willingly just for a taste of her. To see if the reality lived up to the fantasy. But I wasn’t a man. I was a fucking monster. And her interest in me was going to be her ruin. The only thing I gave a damn about was my club, and my brothers. And I was going to show her just how fucking dangerous I could become.

Excerpt –
He brought the bottle up to his lips, finished off the contents, and then threw it off into the darkness behind him in a violent move that caused me to shiver. Then, without a word or warning, he took the few short steps to where I was sitting and reached for me. I gasped when his hands wrapped around my upper arms and he hauled me to my feet.

“You’re going to regret this, but I know you want it as much as I do.”

I didn’t have the wherewithal to utter a single word in response. It was all I could do to take in air as LD hauled me down to the edge of the porch where the light didn’t reach us. I didn’t even make a token attempt to resist. He didn’t give me the chance to anyway. He was big and brutal and so strong that I was helpless. The next thing I was aware of was being pushed up against the side of the house and crushed by the big body behind me.

“Don’t talk,” he snarled against my ear. The feel of his hot whiskey breath against me caused a full-on body reaction.

I could feel the strength of his arousal against my bottom and couldn’t stop myself from thrusting back into it. His hiss told me what I was doing to him. With one hand tangled in my loose hair, the other went straight to my pussy. I was dressed for bed, barefoot, wearing nothing but a tiny pair of boy shorts and a cropped tank that left a lot of skin exposed. It was easy for him to finger the material aside to my bare mound.

His movements were rough, a thick finger entering me without preliminaries. I sucked in my breath as my pussy automatically clamped around it. Teeth skated over the length of my exposed neck.

*Explicit language and adult situations. Book can be read as a standalone but readers may want to read the series in order for a better reading experience.