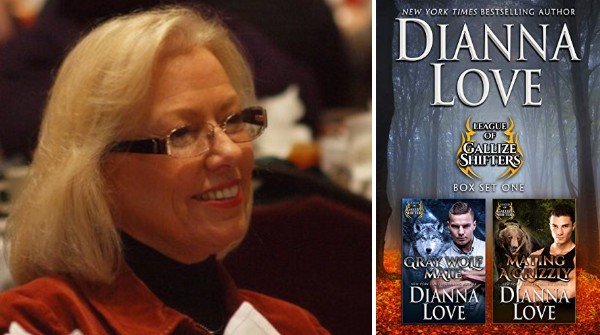 New York Times Bestseller Dianna Love has a brand new paranormal romance series and readers are calling it – “Truly ground-breaking paranormal romance…” and “There are shifters, then there are Gallize shifters.” This box set includes the first two books, which have 235 combined ratings.      GRAY WOLF MATE
In book 1 of the League Of Gallize paranormal shifter series, Cole and Tess were in love one time and might get a second chance if they can stay alive long enough.

Shifters came out to the public eight years ago and, since then, the world has never been the same for many.
Tess Janver and Cole Cavanaugh fell deeply in love in college … then he disappeared without a word. She feared the worst, or so she’d thought. After seven years, he returns as a beefed up version of his former self. That’s not the only thing different. As someone working in a preternatural criminal investigation unit and the daughter of a senator determined to rid the world of dangerous shifters, Tess is caught between performing her duty to humans, protecting the only family she has left and risking her heart to a man who once destroyed it. Cole wants one chance at redemption by stopping a dangerous threat to Tess before he dies from a mating curse. There’s only one woman for him, but bonding with a female human would kill her.

MATING A GRIZZLY
In the second League Of Gallize Shifters book, a fast-paced enemies-to-lovers paranormal romance, can Justin and Elianna overcome an ocean of differences to realize they’re soul mates?

Meet Justin. He’s an elite black ops warrior who turns into a monster grizzly and rushes into danger without hesitation … but he’s having second thoughts on playing bodyguard for a Russian shifter princess. How’d he get stuck with this assignment? He detests arrogant jerks like the ones he grew up around who looked down everyone. But Elianna turns out to be nothing like he expected. She’s dominant, pretty and feels special, like she could be the one, but Justin will have to stop an assassin from killing him and kidnapping her to find out. Elianna has a plan of her own, which doesn’t allow for a sexy bear shifter who will cost her everything when he steals her heart.