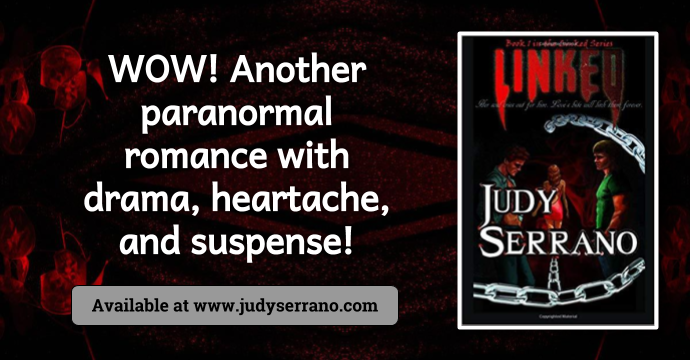 Daphne Foster is a substitute teacher stuck in an English class, waiting for that dreaded parent-teacher conference. With much preparation and anxiety, she encounters the unforgettable Charlie Cross. His charm and good looks win her over, but rumors of his involvement with organized crime make his continued disappearances disturbing. In walks Heathcliff Vanderpool, creating a love triangle of unusual sorts. Unknown to Daphne, Heathcliff and Charlie are old friends: Older than she could have imagined. With Charlie away on business, Daphne and Heathcliff discover a passion between them lying beneath the surface. As their souls link, pulling away from Charlie becomes next to impossible. Will his involvement in organized crime consume them both before she’s able to get free? When you become “linked,” the choice may not be your own.
Available on Amazon Judyserrano Kobo Goodreads


I’m not one for romance novels. But Judy Serrano has written a romance suspense thriller. She captured my attention on the first sentence and kept it until the last page. She has an uncanny ability to tell a story. Her characters are masterfully woven together. Linked is about Daphne, a substitute high school teacher. One night, she meets Charlie, the parent of one of her students, Michael during a parent teacher conference. She feels Michael is disruptive in class and his behavior needs to change. Daphne doesn’t know why, but she finds herself drawn to Charlie in a way she’s never felt before.
As the story unfolds, Daphne discovers Charlie is part of the mob. She also finds out he’s a vampire. The feelings she has for Charlie are very strong and she can’t deny him, no matter how hard she tries. A relationship ensues and she falls in love with him, and he with her. Charlie tells her the reason they feel so strong about each other is because they are Linked.
But there’s one problem. Charlie is married and his wife lashes out at Daphne. Just when you think things are heating up, Daphne meets Cliff, another vampire with the mob. Daphne is at a loss when her feelings for Cliff are stronger than her love for Charlie. Her mind races to know why. Could they be Linked?
Just when I thought things couldn’t get any better, Werewolves come into the picture. At first, I thought the story might change and I would be reading another version of Twilight, but I was wrong. Judy tells a better story. Twilight is about how important it is to have a boyfriend. Linked is a story about a woman who gets lost in a world of good and evil. There’s action in every scene. As Daphne tries to figure out who is good and who is not, her life will be changed forever…
I would recommend this book to anyone. It’s an easy read with twists and turns around every corner. Judy Serrano has a gift for grabbing your attention and never letting you go.

Judy Serrano holds a Master of Arts in English from Texas A&M University, Commerce. She is the owner of Make Cents Editing Service, and was an adjunct professor at a local college. Currently she teaches high school English and is a freelance writer for certain on-line publications. Judy also writes romantic suspense and paranormal romance novels. She is the author of The Easter’s Lilly Series, The Linked Series, and Ivy Vines, Visions.

Although originally from New York, Judy resides in Texas with her husband, four boys, four dogs and now two cats. She sings and plays guitar when she has time and enjoys singing with her very musical family in church when she is able.